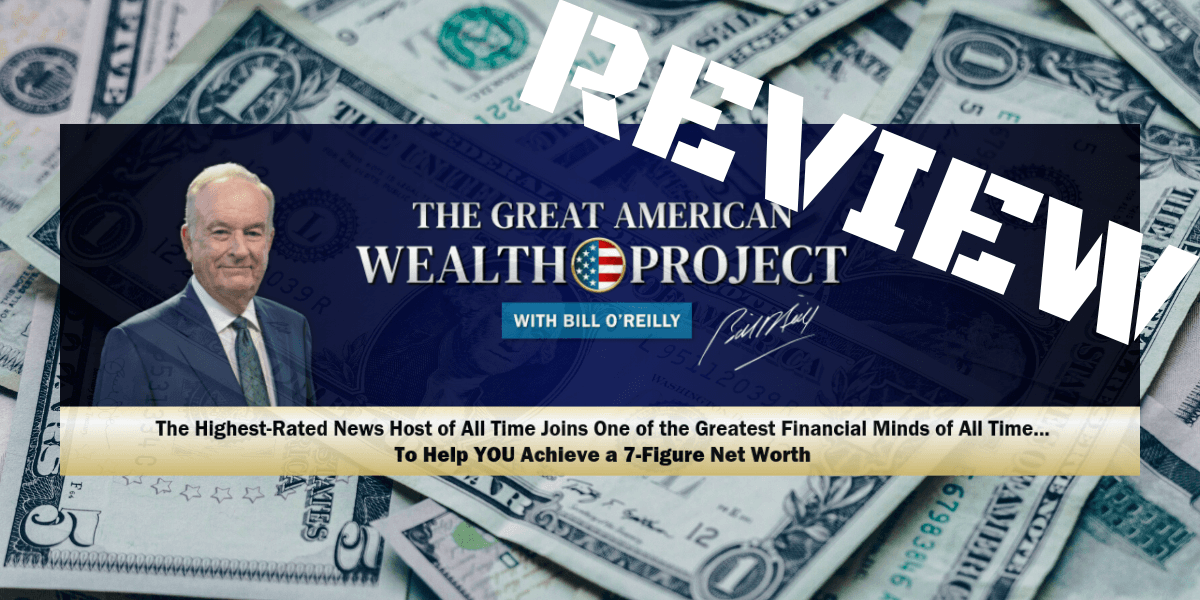 Bill O' Reilly has teamed up with Alexander Green and they claim that they want to help make Americans rich... but what is really going on here?

Is "The Great American Wealth Project" a scam that they are teasing? What is it really?

You've probably come across the video presentation with O'Reilly and Green... 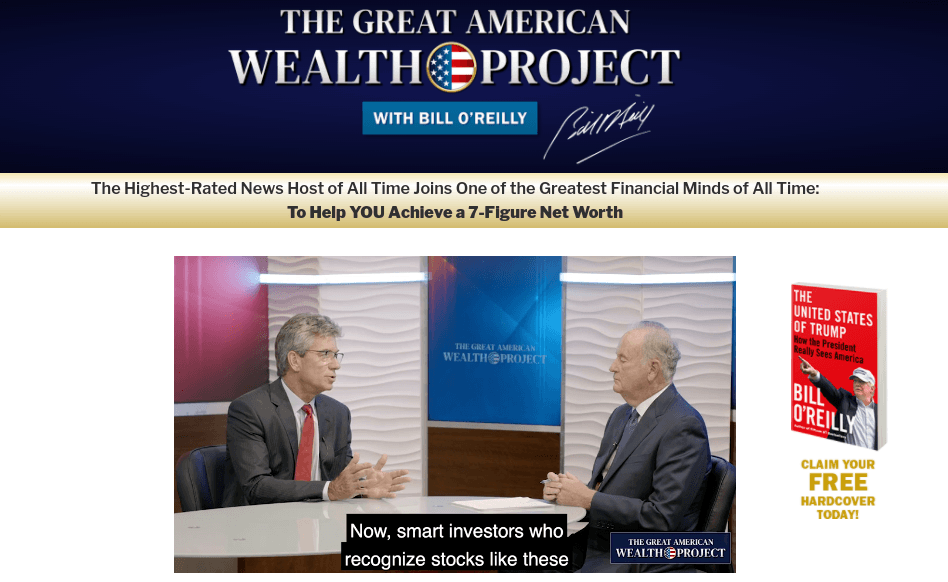 Of course we'd like to think that such a legendary TV host like Bill O' Reilly would never risk his reputation backing a scam... but when an opportunity sounds too good to be true and in the video we are told things like... "you'll be able to live out the retirement of your dreams"... it makes you questions things. 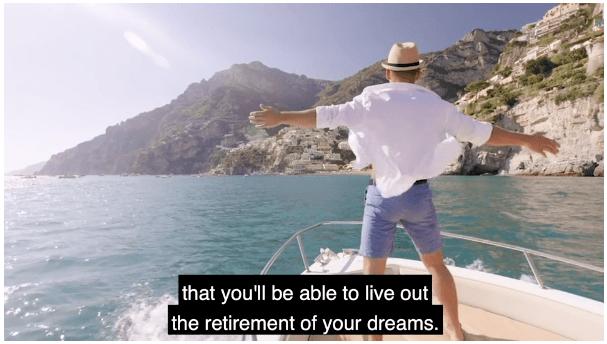 [Yes, this is from the video presentation!]

So anyways... in this review we'll be breaking down what the heck this "Great American Wealth Project" really is that they are talking about.

Prepare yourself because things can get pretty confusing in this mess of marketing shenanigans.

What Is "The Great American Wealth Project"?

The lure of "The Great American Wealth Project" is that you will be able to make professionally recommended investments and earn good money for retirement, with stocks such as the "#1 5G Megastock" being teased. But the purpose behind all the teasing and hoopla is to get subscribers to buy into Alexander Green's paid newsletter service.

This entire marketing stunt is by The Oxford Club, which is an investment advisory and publisher of the newsletter that we are being funneled into here. It may appear that Bill O' Reilly is the guy running things, but he seems to be more of a paid endorsement... how much he was paid we do not know.

The Men Behind It

We all know Bill O Reilly. He's multi-best-selling author, an American journalist, and a former TV host. Although he has received quite a bit of negative publicity from his sexual harassment claim, and was fired from Fox News over it, he is still one of the most respected political commentators out there... in particular for the conservative audience.

But... O' Reilly isn't the main guy behind this thing. As stated, he likely is a paid endorsement, not much different than George Clooney's mega-million dollar endorsement with Nespresso.

Mr. Green is the main guy behind it all, and he is one of the chief investment strategists for The Oxford Club and edits various newsletters including The Oxford Communique, The Insider Alert, The Momentum Alert, and The True Value Alert.

He is known for making some quite remarkable investment recommendations over the years... such as to invest in Apple, Intuitive Surgical, Netflix, Celgene, and Amazon in the early days.

Now I have no idea where he gets these numbers from, but the bottom line is that Alexander Green does have quite an impressive background and knows what he is doing... with over 16 years of experience as an investment advisor, research analyst, and portfolio manager on Wall Street.

BUT... even though these gentlemen do have impressive backgrounds and reputations... the information being presented here is a bit misleading.

The Purpose of This Teaser

I'm calling this a teaser for a reason. The reason is because this is one big marketing stunt to lure in new subscribers to a newsletter by The Oxford Club, as mentioned.

This is the same type of thing going on with St. Paul Research's "7-Day Weed Contracts" that lures subscribers into the Dollar Trade Club newsletter.

The "#1 5G Megastock" ​is the main teaser at the moment, but there may be others.

*More information on what exactly this stock is soon.

The way it works is they tease a bunch of great opportunities and really hype them up... but of course in order to find out what exactly these opportunities are you will first have to subscribe to the newsletter being offered, in this case it is The Oxford Communiqué. 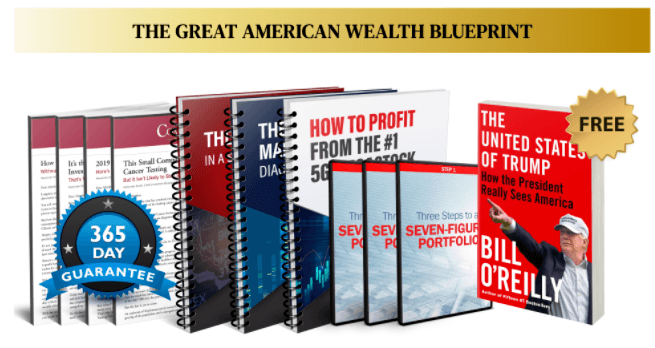 ... and more... but you have to become a subscriber first.

You will get all the "free" bonuses like The United States of Trump and the ebook that provides information on the "#1 5G Megastock", but the core of what you get is the newsletter.

The Oxford Communique provides subscribers with...

It is a type of follow-along investment newsletter where people with no experience can get in on the action and follow the professional recommendations of Mr. Alexander Green... similar to a lot of other follow-along newsletters out there like Alpha Investor Report and Money Map Report.

The cost to subscribe to The Oxford Communique is $49 for a year. They claim that it is normally $249/yr but who knows how true this is... it's likely never sold at that price.

They have a 365-day money-back guarantee in place but this gets a bit tricky. 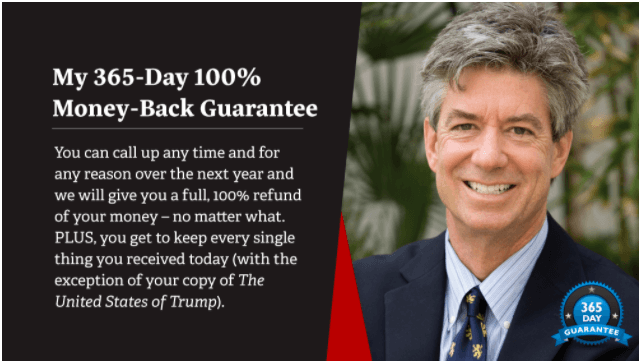 Yes, they say you can get a refund "no questions asked", but actually getting a refund is going to require some work on your part.

I've seen this sort of thing plenty of times before and almost wonder if giving subscribers some sort of physical gift, in this case a book, is just a sneaky little way of making refunds more difficult to obtain.

But anyways, it is what it is. If you want a refund of your $49 then you need to return the book... which I'm guessing you will have to pay postage for.

Now... to what everyone has been waiting for...

The main teaser floating around right now is for this "#1 5G Megastock". Alexander Green claims that if there was ever one single stock to retire on, this is it.

Everything you need to know about it is revealed in his book... 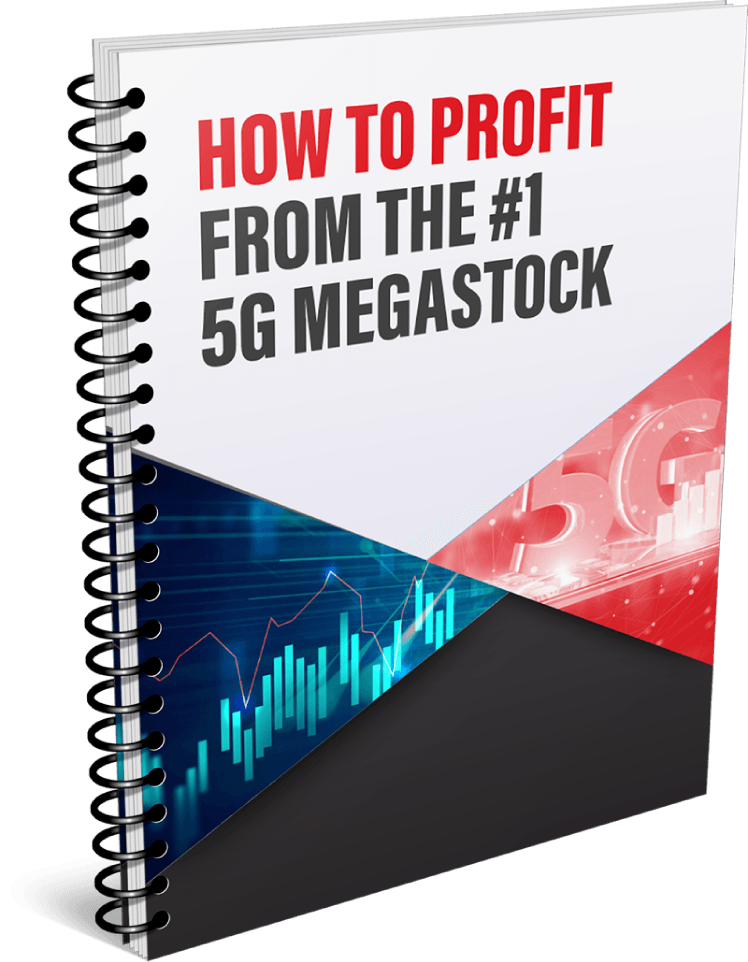 ... but, as mentioned, to get this "free" ebook you have to pay to subscribe to his newsletter.

So let's figure out what exactly the stock is that he is teasing without subscribing.

We know that the company has a role in the 5G revolution. This is a given.

And for those that don't know, 5G is the fifth generation of cellular network technology. There was the first generation, then 2G, 3G, 4G, and now 5G, which is expected to bring about massive changes due to the massive increases in data speeds... up to 100x faster than 4G.

The company, as Alexander Green puts it, meets his criteria for a "perfect stock", which is that it...

And the hints given about the company include that:

Now a lot of what is being teased here doesn't tell us much, which is the whole point. They want to tease us... but of course we need to join to get the free "How to Profit from the #1 5G Megastock" book.

If we put all of what we are told together, and with a little help from our friends over at StockGumshoe, it seems that the stock being teased here is Marvell Technology Group (MRVL).

MRVL matches up with the hints in every way. They are a global semiconductor company that makes chips for Google's Chromecast; they have a partnership with Samsung to deploy 5G networks; they have a partnership with Softbank Group; and Yes... their CEO Matt Murphy was recently quoted saying that the 5G cycle is "not even in the first inning yet" on CNBC's Mad Money with Jim Cramer.

The stock price has seen some ups and downs over the past 5 years, but has been holding high recently... and who knows how high the coming 5G revolution could take it. 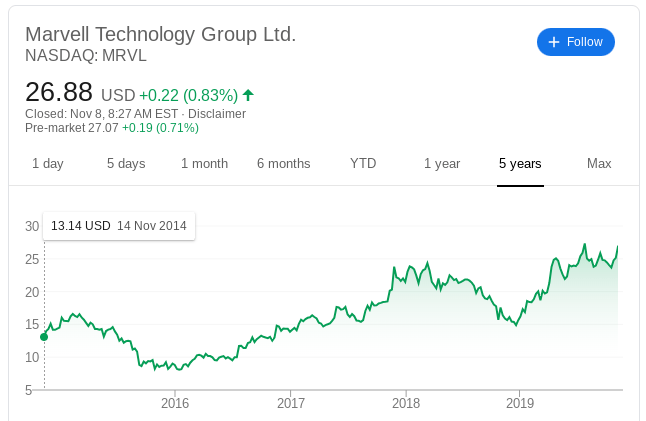 Is "The Great American Wealth Project" a Scam?

I think the picture is pretty clear at this point, but I know people are asking so I'll answer.

No, this is not a scam... just a bit misleading.

What you are provided with, which consists of the free ebooks and newsletter subscription, is of good quality and definitely does have value.

Conclusion - To Join or Not to Join?

Let's do a quick recap here:

Hopefully this clears the air some for those of you who were unclear what was really going on here... which is likely most people due to the misleading nature of the marketing behind this.

This is far from being a scam, but I can potentially see how some people may feel scammed after being lured into subscribing in such a way.

Subscribe if you with to, just know what you are getting yourself into... that's all.

PS: The Motley Fool's Stock Advisor service is one of the very few that I actually recommend. You can check out my review of it HERE.

Comments or questions? Leave them below and I'll get back to you as soon as I can 🙂