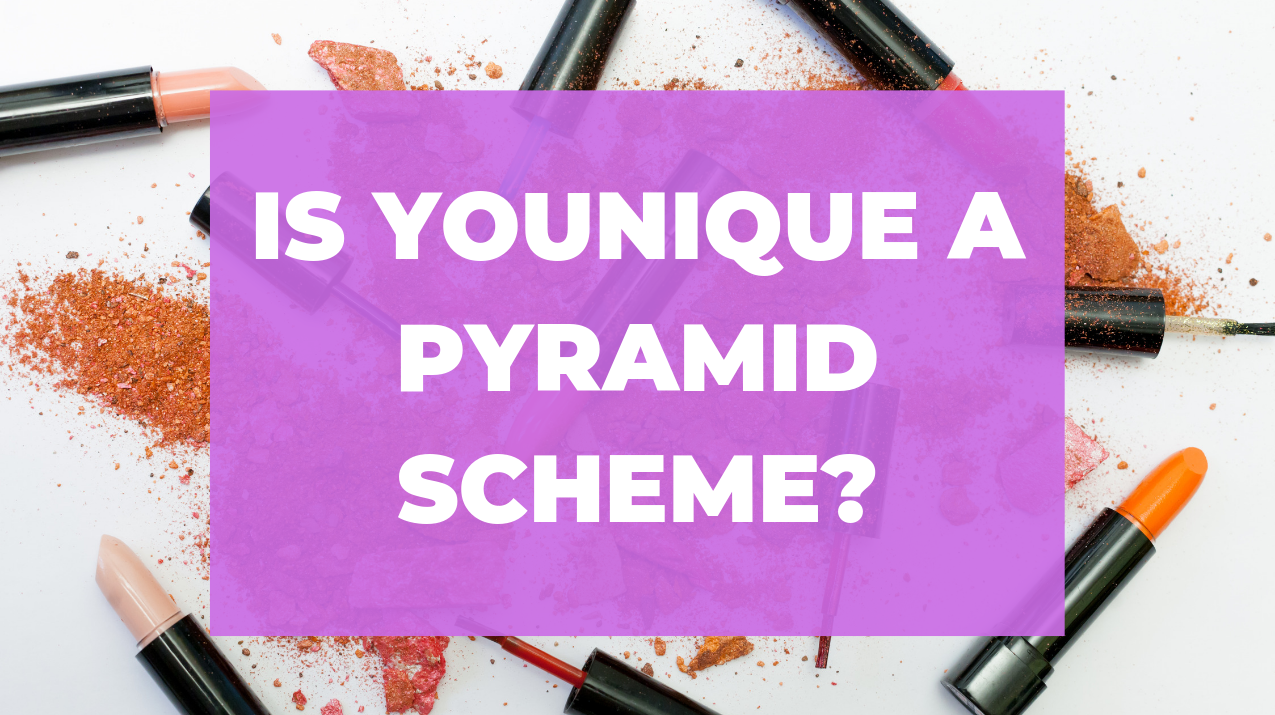 Is Younique a Pyramid Scheme? – The Real Answer

Whether you are just thinking about joining Younique or already have, you are are bound to hear comparisons of it being made to the often illegal pyramid scheme business model. But is Younique a pyramid scheme really?

Sure, I think everyone can see the resemblence to some extent, but this company has been around since 2012–it would have already been shut down if it were actually a pyramid scheme, right???

Unfortunately the lines between what is a pyramid scheme and what is a legitimate MLM business are often blurred–and YES–pyramid schemes can sell products!

In this short article I’ll be breaking down the Younique business opportunity so that you can see how it resembles such and why it is not one (but maybe not much better…?).

Overview of the Business Opportunity

As I’m sure you are already aware, Younique is in the beauty business–and their products range from makeup, to skin care products, fragrances and more. Overall their products have a decent reputation and are of decemt quality–although there seem to be a complaints about lack of  quality standards (complaints about product quality going downhill and such).

Younique started out in September 2012 as a direct sales business. What this means is that they don’t sell products in retail stores, rather, they rely on an independent sales force (mostly women) called “promoters” to do all of the promotion and selling.

In order to join the opportunity you must first purchase a Presenter Kit, which is $199 (as of now).

They call it “the most beautifully simple compensation plan in the industry” and to be honest, this might actually be true. I’ve reviewed many different MLM comp plans in my day and many of them are confusing as heck and very overcomplicated–made to look better than they really are–but Younique’s is simple and does the trick.

They call the commissions “royalties” and there are 3 different types you can earn, including:

The amount you earn (and if you even earn any of these at all) depends on your status (aka rank).

These are the commissions that you earn when you make a sale personally.

When you start out at White status you will earn 20% commissions. Once you hit Yellow you earn 25% and then after that you top out at 30% when you make it to Green status.

Your “circle” is your downline. So if you recruit Kate into the business, she goes out and recruits in Mary, both Mary and Kate are part of your circle. This is just a very basic example, but as you can see your circle can be made up of recruits on multiple levels–not just people you personally recruit in. If Mary were to recruit Vicky, she would also be in your circle.

You won’t start earning these commissions until you reach Pink status, in which you will start out earning 3%, with the possibility of earning as much as 6% as you move up.

When someone in your downline builds a big enough team of their own, they break off from your “circle” and form their own generation, which you still earn commissions from–this would be called your first generation.

As the first generation grows the same thing can happen–a team can break off from that circle and form their own generation, which would then be your second generation.

This can happen at infinite width and depth, but you only get commissions on the first 3 generations (going down 3 generations–I don’t mean you can only earn from 3 generations total).

If you would somehow make it to the Black status (which will probably never happen–sorry), you can max out the generational royalties at 3% for the first generation, 4% for the second generation, and 5% for the third generation.

Obviously your rank, or status, is important here. This is what determines how much you will earn in commissions.

But how do you move up the ranks?

When you first join you start out at the status of White. Here they give you 90 days to become “qualified”, which means you will be able to earn commissions and get paid. In order to do this you must sell a minimum of $125 worth of products–which you have ample time to do.

Once you hit $500 in sales and move up to the Yellow status you get a pay raise. Now you make 25% commissions on your product sales instead of just 20%–and this payraise is a lifetime raise. There is no real timeline for you to do this. If you stick with it and continue to add up sales, you will make Yellow status.

In order to encourage presenters to go full-steam ahead after joining, Younique gives out a $200 bonus if you reach Pink status within the first 90 days.

This status level is the first of the Leadership positions, in which you will be considered an “exemplary presenter”.

In order to get to this level there are 3 requirements:

Having a first-level “qualified presenter” just means that you personally recruited in a presenter that has ‘qualified’ by selling $125 worth of products.

To move your way up to Blue status, there aren’t any variables added to the equation–you just have to do more of what you did at Pink status.

Your personal sales can stay the same–you just need to sell $250 in products a month–but you will have to double your company wholesale sales and have 2 qualified first-level presenters.

Green status is the first “elite presenter” level that you can achieve.

In order to get here you need to sell $500 worth of products a month, have $10,000 in company wholesale sales, have 3 qualified first-level presentes–and have $2,000 in “circle wholesale sales”.

The only different variable here are the “circle wholesale sales”. These are wholesale sales from your “circle”, which includes everyone in your downline that is NOT at Green status and their downline.

How it works is like this–when someone in your downline reaches Green status, they break off from you and form their own “generation”. Commissions from them and their downline are still counted in the “company wholesale sales” but not the “circle wholesale sales”.

With Orange status you still have to sell $500 worth of products monthly, but your company wholesale sales requirement increases to $20,000, you still need 3 first-level qualified presenters, your circle wholesale sales incraese to $4,000–and what’s added on is that you must also have 1 “first generation elite”, which is someone that you personally recruited in who has achieved Green status or higher.

The numbers increase to make it to these statuses, but there is nothing new here. You can refer to the chart below to get a better picture of how this all fits together…

How Is This Not a Pyramid Scheme?

Contrary to popular belief, pyramid schemes can sell products–and most do. The difference between a MLM and pyramid scheme is not quite so simple.

Sure, a pyramid scheme in its pure form sells no products and relies completely on incoming investments from new recruits to pay off older investers–but people are smarter than that–most pyramid schemes cloak themselves as being legitimate by selling products as a front.

What it really comes down to is where the revenue is coming from.

Every MLM out there is going to make money recruiting in new distirbutors, because they almost always require people to pay for some sort of ‘starter kit’, but is there good money coming from sales to the general public?

This is what it really boils down to.

It apprears that Younique makes good money seling products, but this raises the question…

..how many sales are to promoters instead of normal customers?

How many of these sales are coming from promoters buying ‘presenter’ kits and purchasing products vs product sales to the public?

Unfortunately this is a question that is just about impossible to answer, unless you work for the company and have access to such information.

One thing that often is not talked about is how promoters are forced to purchase products–indirectly of course. From fear of losing rank (status), many promoters purchase a bunch of products themselves to keep up their PRS (personal retail sales) level–which is a risky move because they obviously felt forced to make the decision from lack of sales in the first place–and now are digging an even bigger hole.

How is this not a pyramid scheme?

My best answer would be simply because we don’t have any proof that it is one.

Remember–a pyramid scheme can sell the nicest products in the world–but if it is forcing members to purchase products and an overwhelming amount of its profits come from that–it could be labeled a pyramid scheme.

How Much Money Are Promoters Actually Making?

Unfortunately Younique doesn’t provide any sort of official earnings disclosure–not all MLM companies do and for good reason–of course they don’t want to scare people away by showing the horrific statistics that most people fail (Young Living & doTERRA do disclose their stats…and it’s bad).

While there isn’t any official disclosure, we can still try to get a good picture of what your income might look like if you join from other sources and by other means.

An article by the Talented Ladies Club broke down the earnings of 775 women in Younique who were described in a Facebook post by the top promoter as being her “most successful team ever”–and found that the average they were making was about $75 a month.

But of course this is just an average–more realistically there would be a small number of people at the top earning the majority of the money while those at the bottom earn very little and lose money.

While (maybe) not a pyramid scheme, MLM’s have the same basic pyramid structure which pretty much ensures that the majority of people struggle. 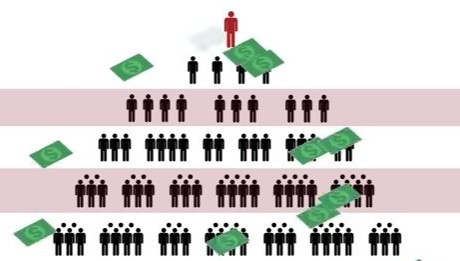 This very reason is why a Black status leader at Younique (with a team of over 5,000 presenters!) quit.

Thinking about joining? I would highly recommend listening to this woman’s story. She climbed her way to the very top and knows about as much as you can in this business:

In the end there is still confusion.

We don’t know how much promoters are actually making (officially), we don’t know the amounts of revenue coming from recruits vs sales to the general public–there is a lot we don’t know.

That said, the FTC still allows Younique to operate legally and that is good enough for me at this point.

Conclusion: No they are not a pyramid scheme.

BUT–don’t get this confused with saying that this is a good opportunity–because that is definitely not what I am implying–as you can tell by the video I posted above.

One thing about MLM’s that you need to know is that, if you do get involved, you are going to have to recruit constantly if you want any chance of making good money. This is how you climb the ranks and this is how you get to the top–and unfortunately to get there you have to get people beneath you, many of them who probably won’t make much of anything.

Think you have what it takes?

Don’t think it’s right for you? Then take a look at these awesome work at home opportunities instead!