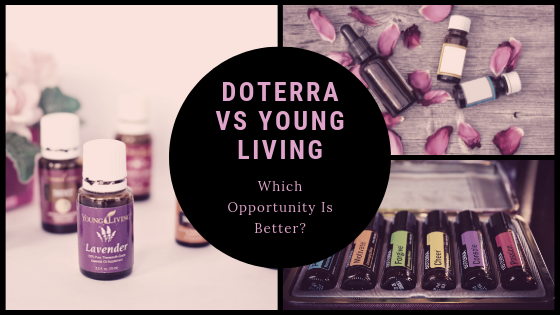 doTERRA vs Young Living – Which Business Opportunity Is Better?

doTERRA and Young Living are very similar, but which is the better choice?

What I’m talking about here specifically are the business opportunities that they both have.

Would it be a more wise choice for you to join doTERRA or Young Living? Which do you stand a better chance of making good money with?

In this quick comparison article I’ll be breaking the two opportunities down for you side-by-side so that you can see how they match up.

As I’m sure you are already aware, doTERRA and Young Living are both in the business of selling essential oil. They both produce a variety of different essential oil products, such as pure essential oils, essential oil blends, lotions, shampoos, supplements and a lot more.

When it comes to the quality of their products it is hard to say which is the better choice–you have diehard advocates for both. One thing is for sure, both companies really put a lot of effort into making their essential oil products as high quality as possible, so I don’t really think you have to worry here. Both companies have what they consider “therapeutic grade” (by their own standards) essential oils.

When you think of essential oils these are pretty much the top 2 companies that come to mind. Young Living is considered the grandfather of essential oils companies, having been started in 1993–with doTERRA just starting in 2008. However, this hasn’t seemed to make much of a difference when it comes to revenue–an article on forbes says doTERRA had an annual revenue of $1.2 billion for 2016 and another article I came across puts Young Living’s revenue at exceeding $1.5 billion in 2017 (a little outdated I know, but still).

Both are giant companies, both sell high quality essential oils, and both offer a very similar business opportunity.

Both doTERRA and Young Living are direct sales companies that have MLM commission structures. In a nutshell, what this means is that independent distributors run around making sales and also recruiting in new distributors to help grow the company and increase their income.

The business opportunity is something that pretty much anyone can get involved with, which is probably the reason you are reading my article now.

But anyways, enough about that… Let’s get into the comparison…

The Process of Joining (and Cost)

The cheapest kit you can purchase from doTERRA is $150 and the more expensive ones get up into the thousands of dollars range.

Young Living pushes you to purchase their Premium Starter Kit for $165, but they also allow you to go with a much cheaper basic starter kit for only $40.

So the initial cost of joining is a bit cheaper for Young Living.

In order to be considered “active” and get access to the compensation plan, both companies require that you maintain at least a 50 PV each month. PV just stands for Personal Volume and represents the volume of products that you purchase.

So what this all means is that you must spend $50 each month on products in order to remain active, since you are going to be buying them at wholesale price (as a distributor).

BUT–this will only keep you active at the lowest rank. You will need to maintain a 100 PV each month for all other ranks–which is what you will have to do if you want any chance of actually making money.

The comparison here isn’t much to go crazy over. Young Living offers 24% direct sale commissions and doTERRA offers 25%–such a little difference it doesn’t really even matter–and certainly doesn’t make one a better choice than the other.

Along with pretty much every other MLM out there–both companies have what is called a “fast start bonus”.

With doTERRA you get paid 20% of your recruits’ PV, 10% commissions from the PV of people they recruit in, and 5% commissions on the 3rd level recruits–for the first 60 days after you recruit the person.

With Young Living you earn a 25% bonus on your recruits’ PV and 10% bonus commissions from the people they recruit–for the first 3 months.

No this is where the multi-level marketing part of it really starts to come into play. And… This is also where the compensation plans start to get pretty confusing. 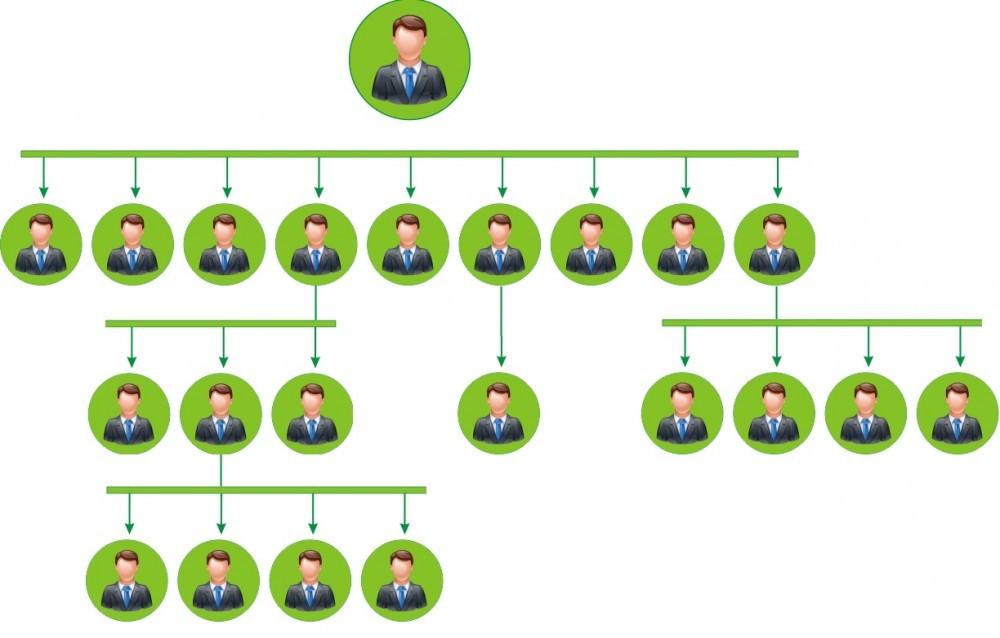 A lot of MLM’s have unilevel structures. What makes them different is the number of levels deep they go and the commissions that you earn on each level.

You can start earning unilevel commissions when you are at the first rank of “Member” but you only earn down 2 levels. Then as you move up the ranks you earn down more and more levels.

Here is the breakdown for each rank:

So with Young Living you max out the unilevel structure when you reach the rank of Executive. 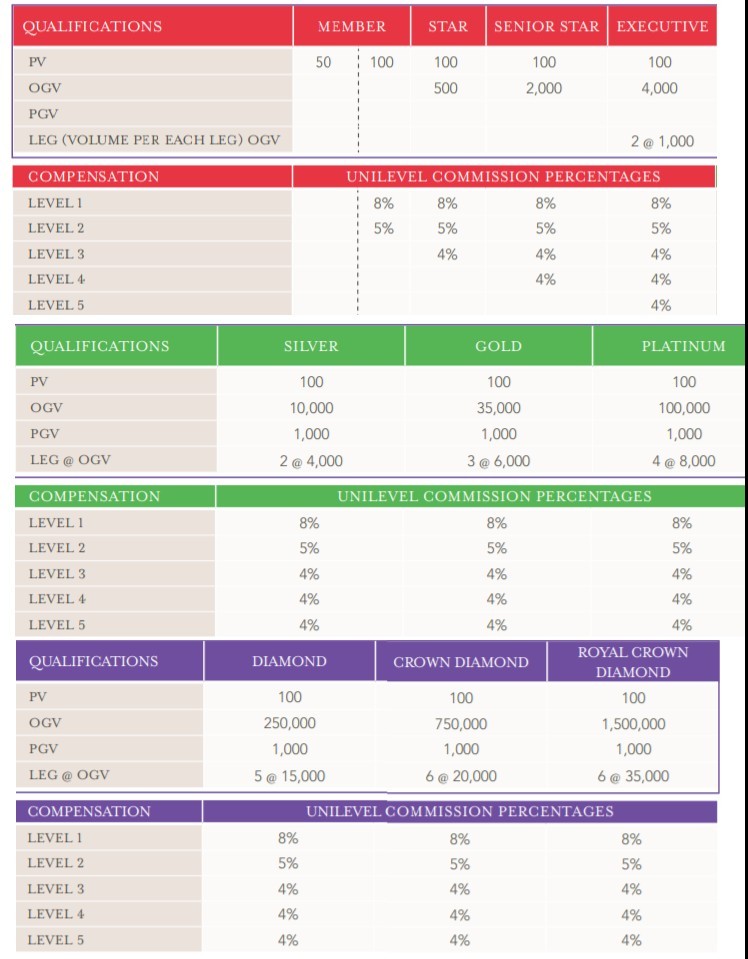 When you first join as a “Wellness Advocate”, which is often called a regular old distributor, you will start earning level 1 commissions, meaning commissions from people that you personally recruit in. Then it goes from there and breaks down like this: 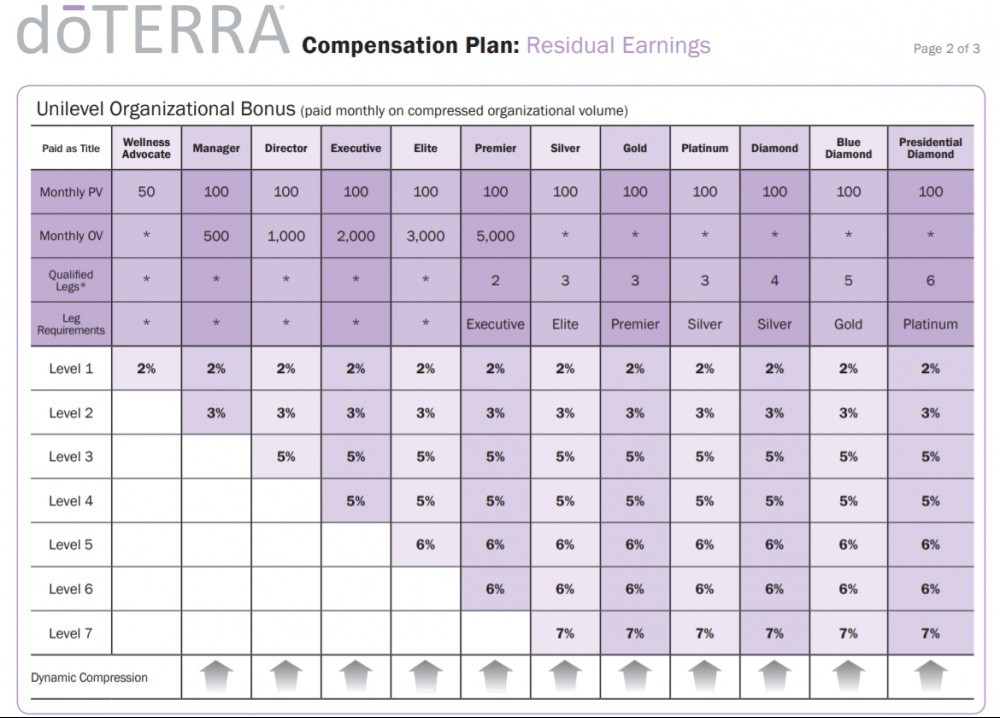 So with doTERRA it works differently. The commissions start out low and increase as you move up the ranks and earn down lower levels, the opposite of how Young Living’s unilevel structure.

With doTERRA you also have the ability to earn down more levels, 7 in total–compared to YL’s 5 levels.

But which is better?

Look at it this way:

If you add up all of doTERRA’s possible commissions for their 7 levels, you end up with 34%.

For this reason I would say that doTERRA’s unilevel structure is more lucrative–or at least has the potential to be.

Generational commissions are commissions paid from “generations”, which are kind-of like little teams that form within your downline.

In YL, when a distributor reaches the rank of Silver they are officially said to have formed their own generation, which includes their downline–which will be a decent size since you are required to recruit a good number of people in to get to this level.

As you can see from the chart below, you have the potential to earn down 8 generations deep at most… 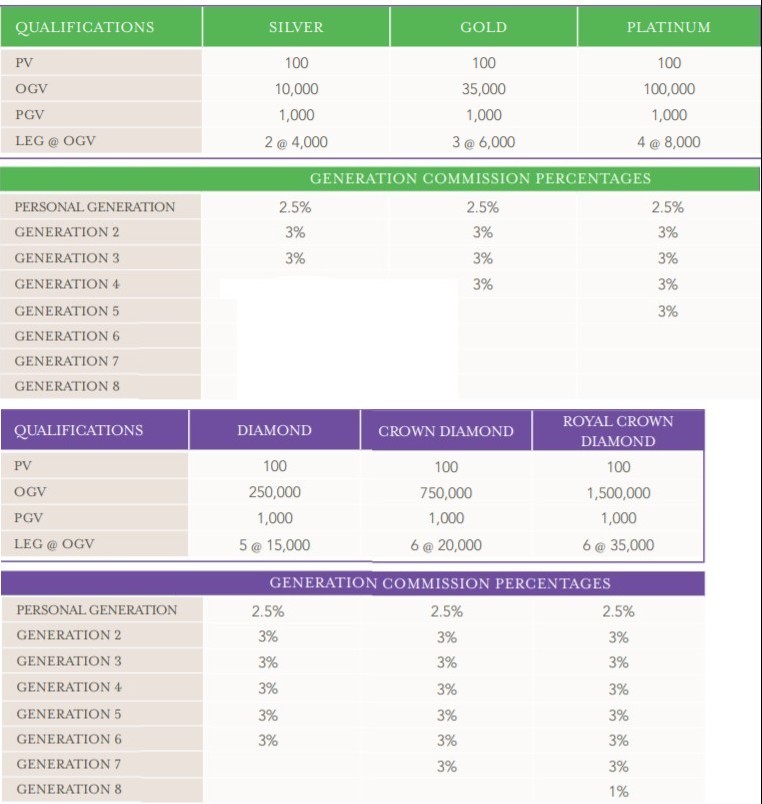 How does this compare to uni-level commissions?

It works in the same basic way, with commissions being passed up the downline to those at the top, but basically gives you a way to earn down farther.

Overall They Are Much More Similar Than Different

It is true that Young Living gives you the ability to receive Generational Bonuses if you move up the ranks enough, but doTERRA pays out more levels deep with their uni-level commissions structure, which you could argue makes up for this.

All in all they are incredibly similar–and it’s hard to declare a winner as to which has the more lucrative comp plan. But, if I had to pick I would go with Young Living.

Why Awesome Looking Compensation Plans Are Often The Worse

Without a doubt Young Living has the more fancy comp plan. They have more bonuses for members to earn, generational commissions, and more.

But this doesn’t really matter–and don’t let it fool you.

They created it to look like a shiny piece of gold that is sure to catch everyones attention and get them excited. But still–it is jsut a MLM and has the same basic pyramid structure as every other MLM.

MLM stands for multi-level marketing and this is a business model that creates incentive to recruit in other members and earn from their efforts–as you say above with the recruitment part of the compensation plans.

If you are at the bottom you are getting more sucked away from you than you are receiving.

This pyramid structure is the reason only a very small percentage of people who get involved in MLM’s make good money.

In fact, you could say that the very structure ensures this to be the case.

What I’ve found is that the more ‘fancy’ a compensation plan is, usually the more uneven the income distribution–meaning the more people fail–but since these are pretty similar overall, there isn’t much difference between failure rates (I’ll go over them next!).

So next time you see some incredible comp plan where you can earn down 12 levels, get paid all sorts of bonuses, etc… remember this. All these fancy moving parts just take more money from those at the bottom and make it more difficult for the majority.

Hopefully that last section warmed you up for this–because this is NOT going to be pleasant.

I hope you haven’t just eaten. If you have, let it digest some. These statistics may make you cringe and your stomach turn.

Young LIving’s income disclosure shows the reality of being a distributor for the company.

About 96% of all distributors made not even close to enough for a full-time income. About 74% made less than $1,000 for the entire year… and less than 1% made it to the rank of Gold and above. Overall–very few made good money.

doTERRA’s income disclosure is a lot more confusing and hard to piece together. They do what most MLM companies do–which is make it difficult to understand so that it seems better than it really is. But I’ll break it down for you so that you can get a clear picture of how much distributors are actually making.

You are more than welcome to click the link above and read their income disclosure for yourself, but here is the simplified breakdown…

This last 1% are the people who have achieved “Leadership ranks”. These are the only people doTERRA provides us with a nice fancy income chart for–probably because they actually made good money unlike the other 99%…

What About All The People Who Joined & Gave Up?… or Joined Only For The Discounted Products?

This is one thing that makes it really hard to get good stats–because what about all the people who join and then don’t even try?.. or join just to get member discounts and be able to buy at wholesale price?

The numbers often don’t take into account these people. So the real numbers are actually probably a little better than they seem–although I wouldn’t expect them to be much better.

Conclusion – Which Is The Better Choice?

Numbers don’t lie and from what I see they both seem to be pretty bad opportunities–as with just about every MLM ever.

As stated, the very pyramid-like structure pretty much guarantees failure for most participants.

This is why I always recommend affiliate marketing–you can read a comparison article I wrote between the two business models here.

I hope you enjoyed this comparison article. It took me a good bit of research and time, so I’d appreciate it if you left a comment below 🙂 or any questions of course.