The My Ecom Club Scam – Internet Marketing at It’s Lowest

I’ve been seeing promotional content for My Ecom Club all over the place lately so I decided to dig deep into it and see what it’s all about.

Is it true that My Ecom Club is a scam? (the rumors are out there)

Is this a good opportunity for those looking to make money online in the rapidly growing ecommerce industry?

Unfortunately the answer is pretty much a Yes to that first question. I guess I wouldn’t go as far as saying that My Ecom Club is a complete scam, but it could without a doubt be called a scam to some extent.

In this review you will see what I mean. I’ll be going over the deceptive marketing tactics and trickery used to lure people into this program, the people behind it all (who you can’t trust), the hidden costs, complaints and more.

Overview of My Ecom Club

My Ecom Club is an ecommerce training program that helps people start their own ecommerce businesses “quickly and easily”–so they say. The focus is on setting up an ecom store with Shopify and dropshipping to make money.

Dropshipping, in a nutshell, is when you sell with your own ecommerce website but never actually keep inventory. Instead, when a customer buys a product on your site, you have it sent directly from the manufacturer–a great business model.

One of their main selling points is that they offer “done for you” websites–as in ecommerce websites that are already set up for you with products and all. They also offer training on building, running and growing ecommerce sites, traffic generation, one-on-one advisors and more.

I probably wouldn’t have a problem with this training program if that was all there was to be said–but unfortunately there are hiddent costs, deceptive and misleading marketing sucking in new members, no transparency whatsoever, and the list goes on…

This is why I call it a scam–although the training itself is not a scam.

Let’s start by talking about some of the absolutely ridiculous sales tactics being used to promote My Ecom Club, which you very well may have come across.

If you want some good examples of misleading and deceptive online marketing sales tactics then look no further than those used to promote My Ecom Club.

Get The Discovery, Click N Flip, The Ecom Freedom Blueprint, Ecom Cash Code, Broke Dishwasher System–these are all different names and websites this program has been promoted though. 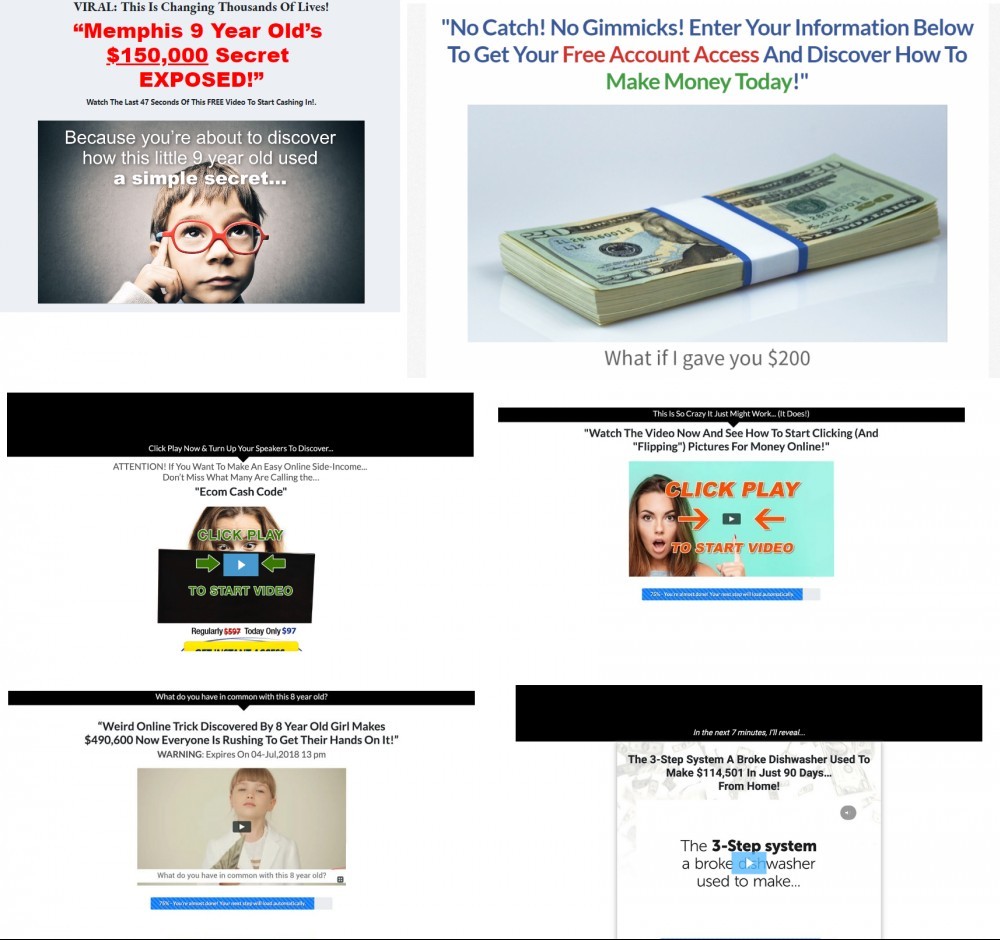 When people ask what I do for work and I tell them that I make a living doing online marketing, they often get a bad impression–and scammy, unethical promotions like this are the reason.

If you are funneled in through one of these promotions you really have no idea what you are getting involved with. There usually is no mention of My Ecom Club whatsoever.

For example: The promotion pictured above of the “Memphis 9 Year Old’s $150,000 Secret EXPOSED!” leads you to this checkout page… 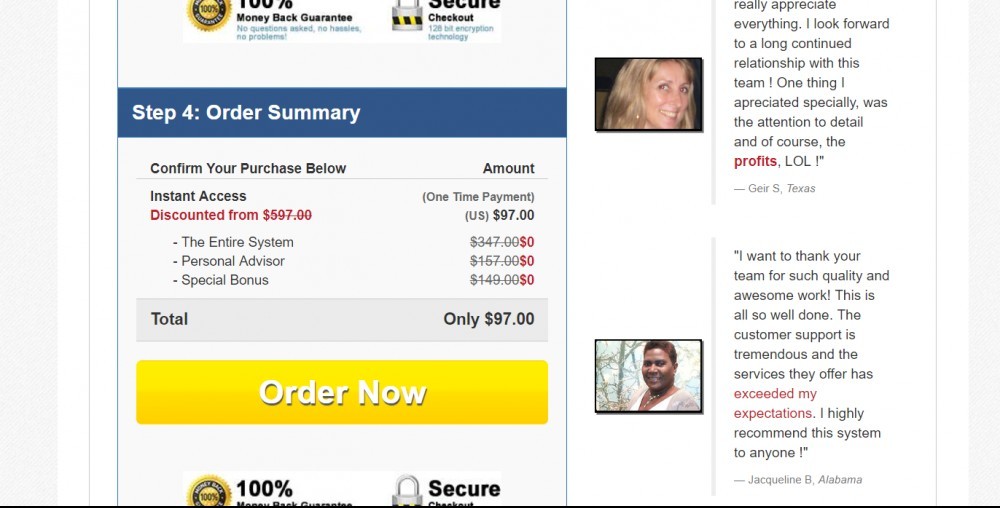 Not one mention of My Ecom Club, yet that is what you will be buying into.

Not only that–but the promotional material surrounding this program is absurd. It often leads you to believe you will get some automated, “push button”, super easy system that you can get rich with by only spending a few minutes of time a day–all a bunch of BS.

The Team Behind It All

Teo Vee is supposedly the man behind much of what My Ecom Club has to offer–specifically the training–but there is very little information on him.

Sometimes his name is mentioned in the sales videos but often it is not. Often times My Ecom Club is promoted under some fake alias in the video presentations, which isn’t surprising.

I have searched around quite a bit for information on him but always come up short. In fact, I can’t even find any photos of the guy. Even on his social media accounts such as Twitter there is little info–no pictures or anything.

All in all, this guy is pretty much a ghost–and this is troubling.

There is also this “Rocky Lin” character mentioned on the website. Apparently if you buy into some of the upsells that My Ecom Club offers, such as the Gold Membership, you get extra training from this guy.

Well–it’s pretty much the same story here. There is very limited information on him–practically none at all.

All I know is that he supposedly makes a ton of money in the ecommerce business and is also associated with scammy programs like ‘My Hidden Pages’ and ‘My Secret Sites’.

Can you trust him? I sure as heck don’t!

There isn’t much info, or really any at all, mentioned about this guy–he just kind-of shows up out of nowhere.

That said, it seems that he is the internet marketer that goes by the name of “Jordan Daniels”–who has a pretty bad reputation online, having been involved in shady promotions for the (now shut down by the FTC) MOBE program, such as “My Optimized Success Plan”, “My AE Success” and others.

Not exaclty the type of person I would call trustworthy.

How can you fully trust a training program like this if you don’t even know the people behind it?

It’s hard to say what exactly is going on here because this company lacks transparency big time. There is no “about” page on the website that clearly goes over who the people behind this are and we are left in the dark on most things.

Teo Vee, Rocky Lin, and Jordan Daniels seem to be 3 of the “higherups” involved in this, but there are also other names involved too.

Overall not a good look–and definitely a problem as far as I see it. I don’t know about you, but if I buy into something like this I want to be able to trust the people who are behind it.

Most people that get involved with My Ecom Club probably have no idea what they are in for–and it’s not their fault–the reason being that this place misleads customers and doesn’t tell them all the details.

The training starts out as being free–and there are about 4 hours of training videos that you will be able to go through without paying for them. HOWEVER. if you plan on following along with the training you are going to have to subscribe for Shopify and Oberlo, which cost $29/mo and $29.90/mo respectively.

*Shopify offers a 14 day free trail, then you pay–Oberlo has a free Starter plan but you might be pushed to purchase one of their paid plans.

Shopify is the website platform you will be creating your ecommerce website on–which is the most popular and well trusted out there… And Oberlo is a dropshipping plugin for your shopify store that allows you to easily manage this particular business model.

The two main upsells you will be pushed into buying include…

Then there is also a $97 Gold Membership that may be pushed on you too, depending on the sales funnel you enter into this black hole with.

Did you have any idea that the cost would be this much? Probably not–and again, this isn’t your faullt. This is the fault of the people behind this program not disclosing much information.

The user reviews you will find online for My Ecom Club are very mixed. People hate it and they love it. Some people call it a scam and others call it the greatest training ever.

If you look at reviews on Facebook you will find plenty of positive ones–much moreso than negative. At the time of me writing this they have around 600 reviews with an average rating of 4.5/5, which is pretty darn good…

Most of the complaints I have come across have to do with unauthorized charges–as in people’s credit/debit cards being charged without them knowing it.

Maybe there was some fine print that mentioned they will be charged, as is usually the case, but the point is that there are numerous people upset about this sort of shady activity, and many complaints with the BBB. 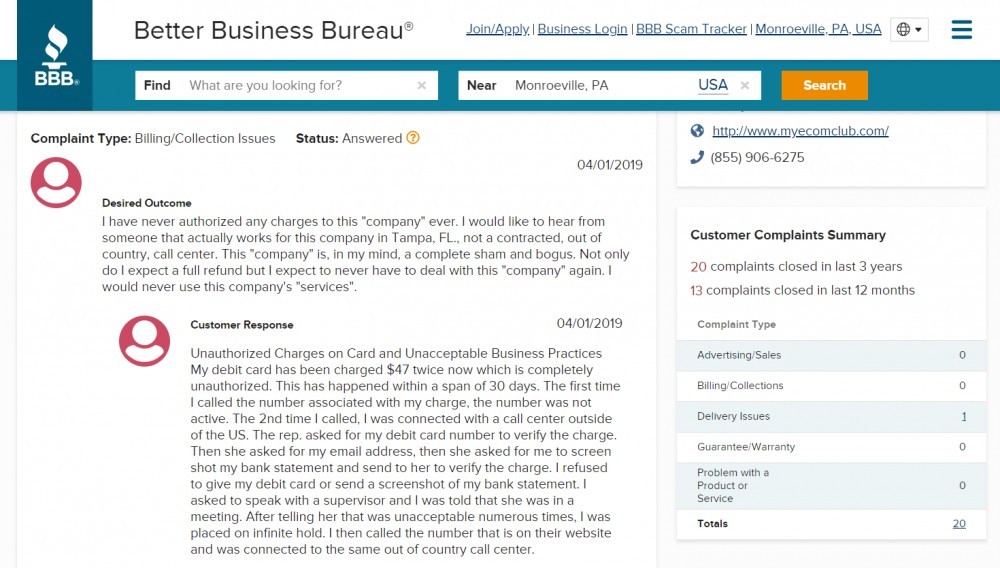 Can you trust these reviews? (My Guess Is No)

It is true that a lot of people complain about things that aren’t a big deal and often leave undeserved negative reviews for things that they might not understand, or that they are to blame for–but I’m not talking about these here.

What I’m talking about are the positive reviews–all the people saying how great this training course is–can you really trust them?

My opinion: Not entirely

Companies often will pay people to leave positive reviews for them–which leads to reviews that are not geniune and can’t be trusted. I don’t doubt for a second that this is going on with My Ecom Club.

First off…how on earth does this place have 186 reviews with the BBB and an overall rating of over 4.5 out of 5 stars??.. 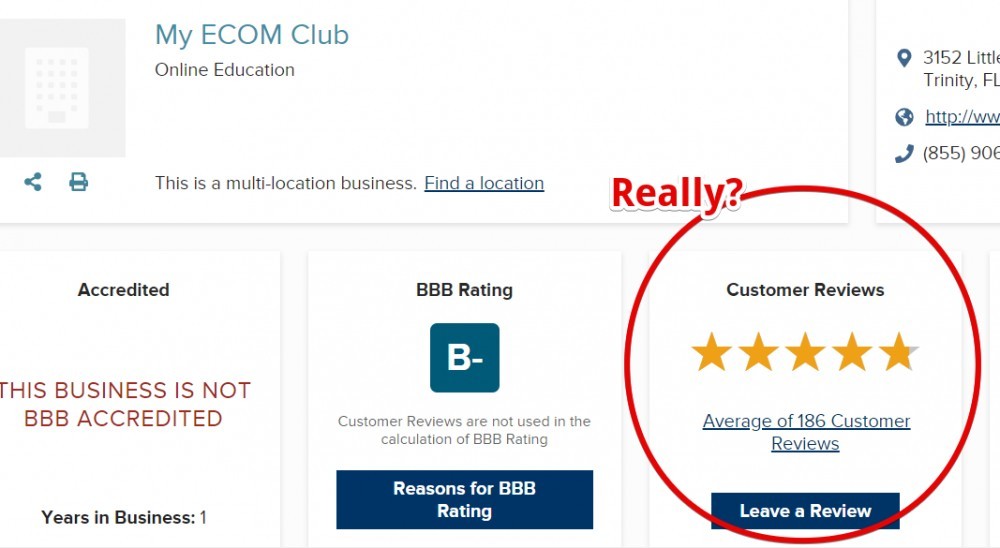 …And how do they have so many positive reviews on Trustpilot (129 with a 5 star average as I’m writing this!)???… 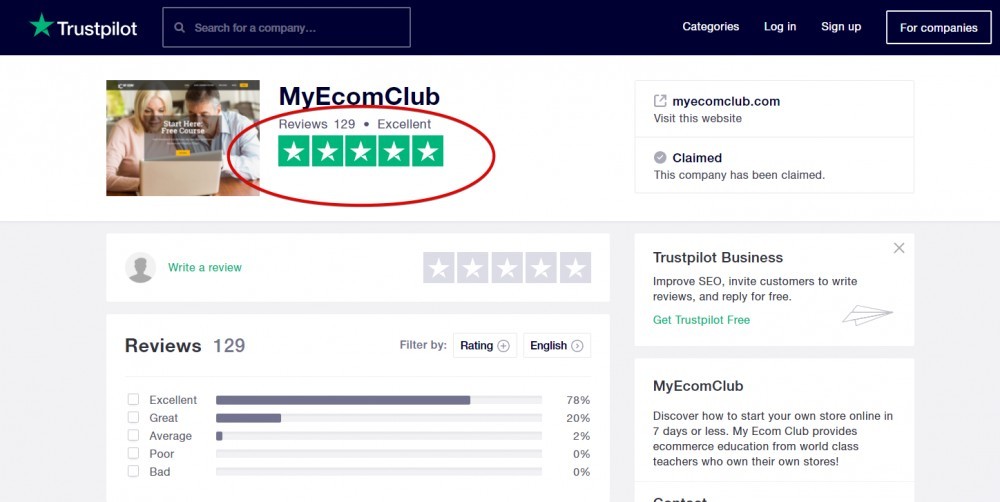 I have reviewed hundreds of potential scams, programs, courses, etc. online and I often look at the BBB’s website as well as Trustpilot to see what other people think. What I’ve found is that usually people go to these sites to complain–not to leave positive reviews. Sure, positive reviews happen–but at this rate they seem a little fishy–and I have reason to believe that they are fake (or at least many of them).

Conclusion – I Would Highly Recommend Avoiding This Place

…these are some of the characteristics associated with My Ecom Club.

Now does this seem like something that you should be getting involved with? Obviously not.

Internet marketing often gets a bad rap for shady sales tactics and misleading info, but there are honest internet marketers out there too–this happens to be one of those bad apples that brings a bad look to the whole industry.

All in all there is no way in heck I’m going to be recommending any of my readers to sign up to this program. If you want a personal recommedation of mine I would suggest taking a look at this program I got started with in 2015 and currently make a living with working online with.

Also feel free to check out my top work at home opportunities for more.

I hope you enjoyed this post and found it helpful. Please give it a share to help spread the word.