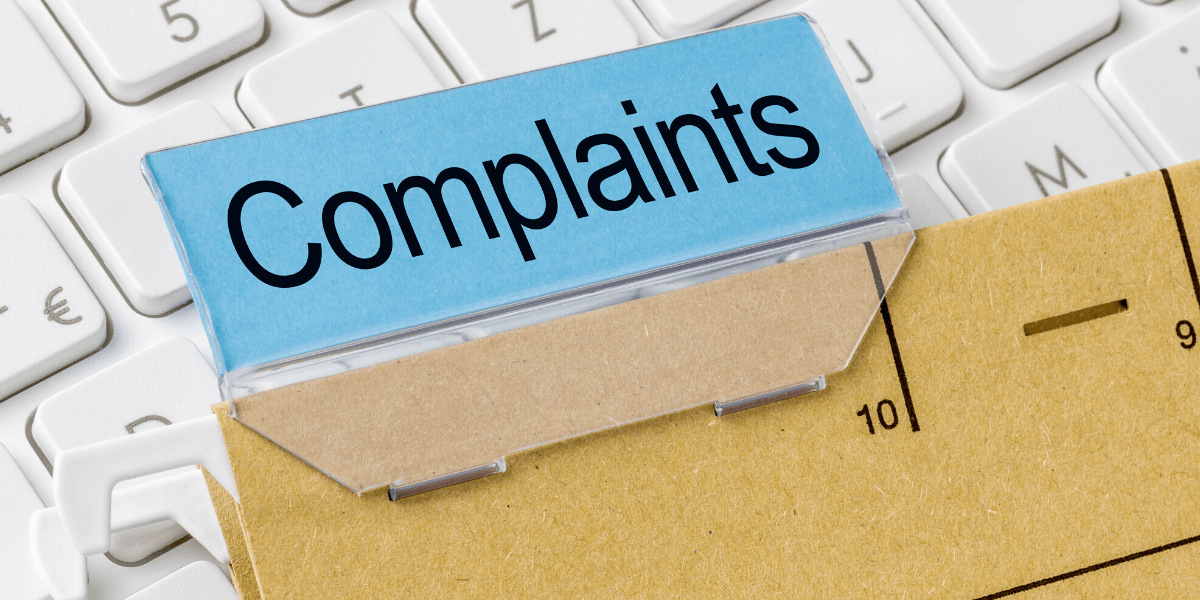 Complaints About Casey Research – 8 You Should Know About

There are quite a number of complaints about Casey Research out there... complaints you should know about before subscribing to any of their services.

In this article we'll be going over 8 complaints that you should definitely be aware of. Hopefully the team over at Casey Research will read this and take some action to improve their not-so-great reputation.

Disclosure: These complaints have been found from on sites like...

Casey Research is heavily involved in misleading marketing material that lures in subscribers in ways that aren't all that honest.

Fear mongering, scaring people into subscribing, giving away "free" reports that require you to purchase a subscription... these are all examples.

One particular reason for a number of complaints has to do with their tricky marketing using books as a lure, where if you buy one of their books you automatically get subscribed to a newsletter, which if you don't cancel within 30 days you are charged for.

For example, Doug Casey's book Totally Incorrect Volume 2 comes with a 30-day trial for one of their subscriptions, and some people are not too happy with this, such as this person who claims "nowhere did I see I was going to be charged $104" (from the subscription)...

And going along with this, here is another complaint, but this one from someone who was pushed to purchase 2 books, declined the offer and only ordered 1, but was charged for both books anyhow... 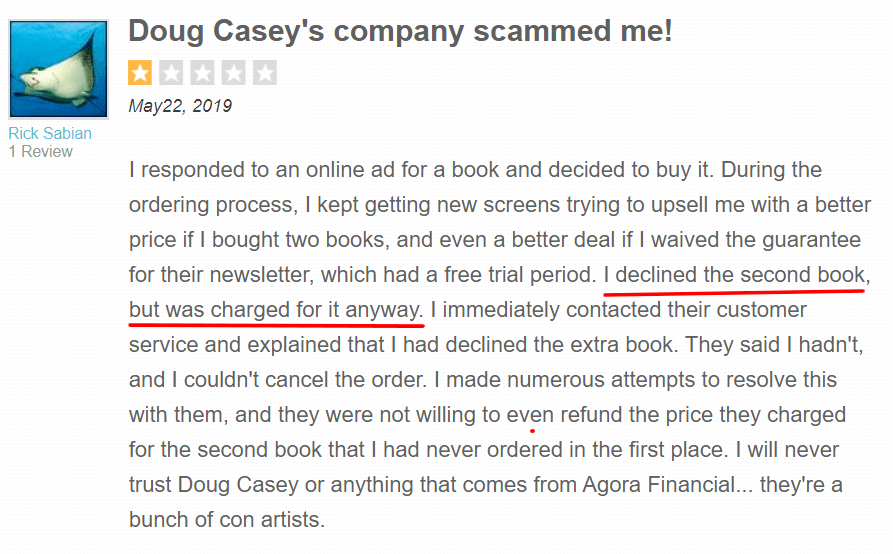 With this company you HAVE TO READ THE FINE PRINT. They aren't doing anything that is actually illegal... just highly unethical, that's all.

*It seems that this is the blueprint that most advisory services follow these days, which is a shame.

When you purchase a subscription for any of their services it should be noted that your card will automatically be charged again when the subscription runs out. They do state this but it seems that some people are unaware of it and get angry when they see a new charge on their card.

It would be nice if there was reminder sent out before the automatic renewal happens, because a year's time is a long time and it would be easy to forget about it, but they aren't so nice to do this.

There also have been a number of people complaining about having trouble canceling a subscription, such as cancelling and then later finding out that they are still being charged.

The complaint below is from someone who had a subscription that renewed in 2 years. They claim to have canceled after 1 year but were charged again anyhow the 2nd year... and this was for a $2,000 subscription!...

Based on the promotional material you see for the various advisory services that Casey Research offers, you may be led to believe that a subscription is pretty much a guaranteed way to earn some money. However, like most investment advisory service providers, there is a severe lack of transparency here and they only show the good side... the winning trades.

There are quite a number of complaints from people who have lost money and feel they have been mislead.

An honest track-record would be nice to see, but of course this would hurt their business.

It seems there are refunds for some of their services, but not for all, which is a load of BS. In their Terms of Service they state that "All Fees are due immediately or upon ordering and are non-refundable, except as otherwise expressly provided".

For an online service like this it could not be any more easy to provide refunds, since there is nothing that needs physically returned... yet they don't provide them.

What they will provide is credit towards one of their other services in some situations, as shown in this snippet of their policy for The Casey Research Report...

But, if you are cancelling one of their subscriptions, chances are you want nothing to do with any of their other subscriptions either, which pretty much makes this policy a joke.

There are some claims that the whole company is engaged in pump & dump activity, meaning that they are investing in the recommended opportunities first, sending out the recommendations to subscribers to drive up the price, and then cashing out... 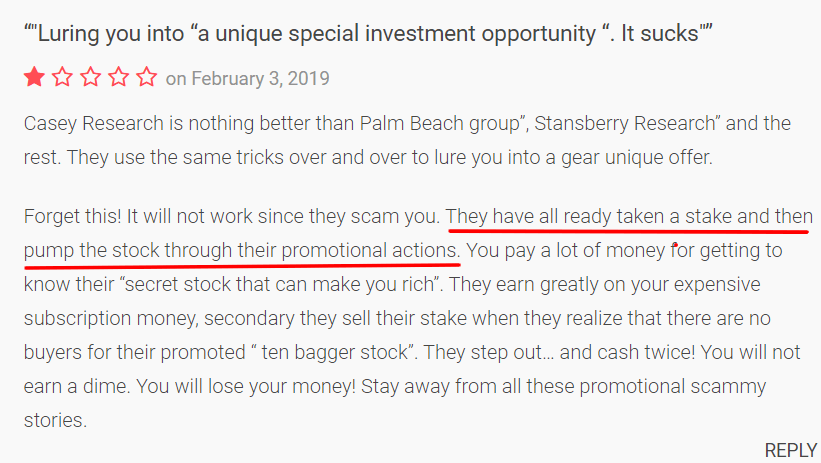 We have no proof of this actually happening, but it is a bit concerning since they have no policy requiring their expert advisers to wait before entering trades.

For example, The Oxford Club, which is another investment advisory firm that offers newsletter services, requires its employees to wait at least 24 hours after an online publication before they can invest themselves, and longer for print publications.

This helps mitigate the chances for a pump & dump, since it wouldn't be nearly as profitable if you had to wait to get in and others would get in before you.

If you do end up joining any of their subscription services then you'd better be prepared for a bombardment of promotions. The company is very "salesy" in general, and as you can see below one person complains that there is "excessive upselling and email spamming in abundance"...

Another complaint we found states that "they fill up my email box and most of the emails are hooks to get you to buy into more of their services"...

Many of the complaints, such as those dealing with problems canceling subscription and billing issues, could be taken care of if they would improve their customer service... but this isn't likely to change any time soon.

If you do have an issue and need to contact them, good luck with this. According to one subscriber, "they don't answer your email or phone calls"... 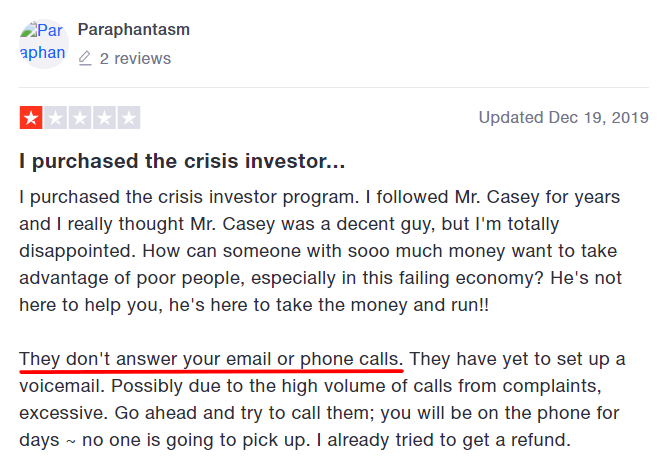 And there are more where that came from.

It's almost like they want to keep their customer support team poor & lousy so that they don't have to give out so many refunds and answer so many complaints.

*Tip: If you are having trouble contacting them, just submit a complaint with the BBB. They will be much more likely to respond to you then 🙂

There are some subscribers who are more than happy with the services provided. So don't get the wrong impression here.

That said, as stated, the overall reputation of the company isn't great, and their C rating with the BBB reflects this.

Reputable investment advisory service providers are few and far between. Most seem to follow the same scammy/dishonest blueprint of misleading marketing, lack of transparency with trades, fine print that tricks people into subscribing, no refunds, etc. However, there are still some good services out there.

Motely Fool's Stock Advisor service is one that we do recommend... one of the very few. You can read our review of this service here for more information.

Now it's your turn: Share this post. The more people that see this, the more likely Casey Research will be to clean up their act.