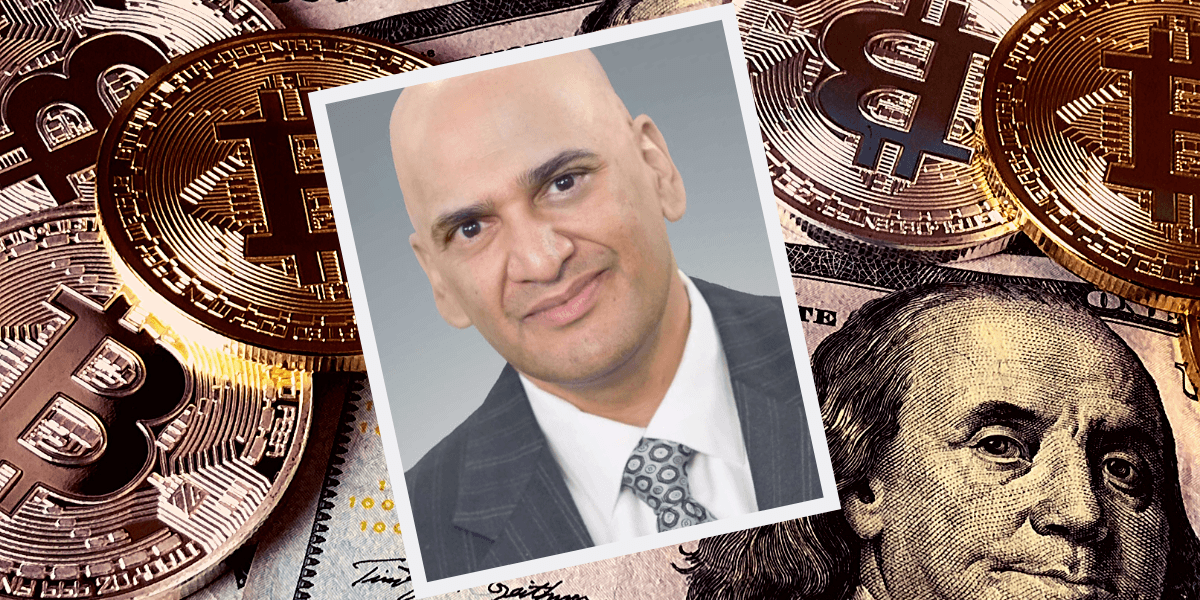 Is Teeka Tiwari Legit & Can You Trust His Recommendations?

Is Teeka Tiwari legit? Can you trust his recommendations or is he just another salesman trying to make a quick buck off of subscribers to his various investment newsletters?

What's concerning is that there are people calling him a scam... so I decided to look into things more to see if he can actually be trusted. Overall he does seem legit, but the performance of his recommendations is a bit iffy.

They call him "The Crypto Oracle", but I'm not sure if this was a nickname he made up or if he was given it by someone else.

Right now there are a lot of promotions going on for his "5 coins to 5 million" event, in which he reveals 5 cryptocurrencies that he believes you could invest $500 in and they could shoot up to $5 million, which is a lure to get people to subscribe to his one newsletter service.

He's most well known for his cryptocurrency recommendations, but he actually runs several different advisory services and provides recommendations in other areas such as stocks, ETFs, options... not just crypto.

Based on some of what you hear from others online, and from the over-the-top promotional material for his newsletter services... you might think this guy is nothing but a fraud, but his background is pretty impressive and he is considered an expert by many, which is why he's had the opportunity to go on Fox News, CNBC, Nightline, The Daily Show and other networks to talk investing.

At the age of 18 he was hired at Lehman Brothers, making him their youngest ever employee. Fast forward 2 years and he had moved his way up the ranks to Vice President at Shearson Lehman... another record for the youngest ever.

He has had successes and failures, but mostly successes it seems.

Early in his career, back in 1998, he made a "small fortune" during the Asian crisis, but soon after lost it all and actually had to file bankruptcy. But this didn't stop him, and he learned an important lesson from it, which is that of making risk management a priority, something you see him focusing largely on today.

Shortly after filing for bankruptcy he launched a hedge fund that went on to be wildly successful, he was investing in Bitcoin back in 2012 when it was trading at $50, and now it seems that his main gig is providing investment advice to followers via various newsletter services, all published by the Palm Beach Research Group where he is employed.

Well, the approach Teeka takes to mitigate risk is by following the "asymmetrical risk" concept. In a nutshell, this means taking a small risk that could produce a return that far surpasses the risk taken.

For example: He recommends investing $500 in XYZ coin, which he believes could turn into $5 million in the future. Now, if it goes to $0 and you lose your initial investment, it sucks but isn't the end of the world... but if things work out then the small risk taken could produce results that far outweigh it.

These are the types of opportunities he looks for. He basically looks for ways to "get rich quick".

Now whether or not you agree with this type of strategy is up to you. Some compare it to playing the lottery. Sure, a ticket doesn't cost much, but you may have the chance of becoming a millionaire... although the chances are slim to none.

*Crypto is definitely a better investment than the lottery though!

You've probably heard him bragging about his track-record, consistently picking the best performing coins in the crypto space and whatnot.

He did recommended Bitcoin and Ether back in 2016 when the coins were trading at around $400 and $9, respectively... and as mentioned, he was buying Bitcoin himself back in 2012 for $50.

However, there is no really clear track record as to his overall recommendations' performance.

Of course we are going to hear all the amazing picks he's had over the years in the promotional material for his newsletter services, but this doesn't mean much.

A comment by a subscriber of Palm Beach Confidential (his main cryptocurrency newsletter service) on Stock Gumshoe mentions that his portfolio would be down by 80 - 90% if it weren't for a few big winning recommendations, such as BTC and ETH... 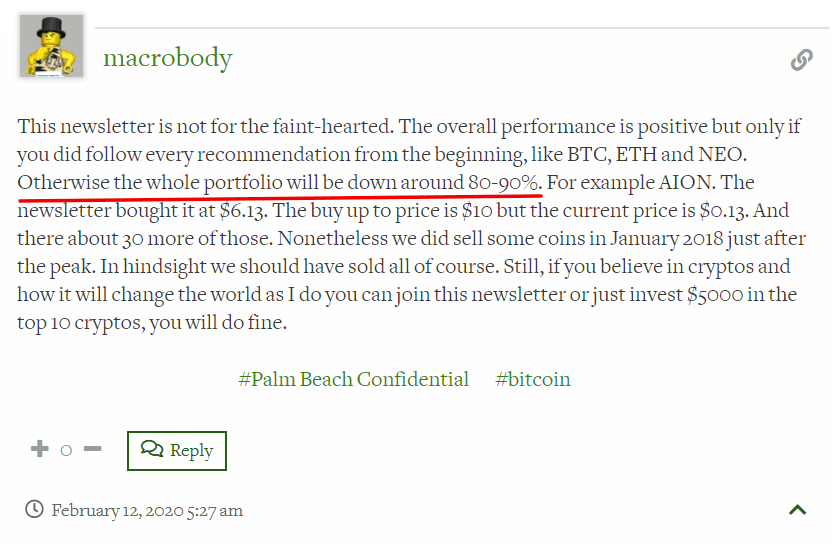 In addition to this, you'll see shortly that there are other's who agree with the above statement, which is that most of his recommendations have been losers.

I've tried to find more transparent performance records, but have come up short. Most of what I've found online has just turned out to be from people promoting the heck out of his newsletters.

That said, we need to give him credit where credit is due... and he his top crypto picks over the years have fared pretty well... 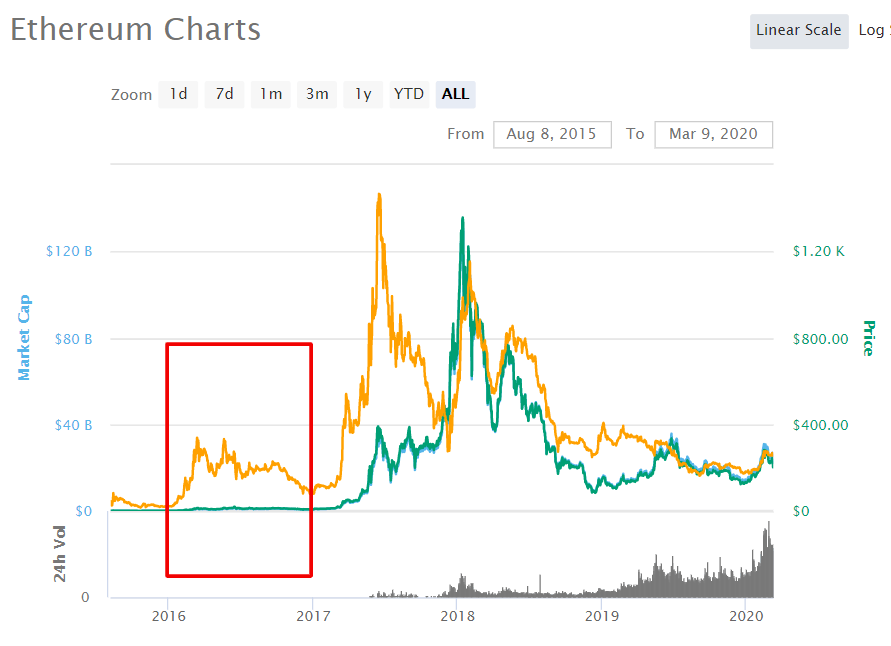 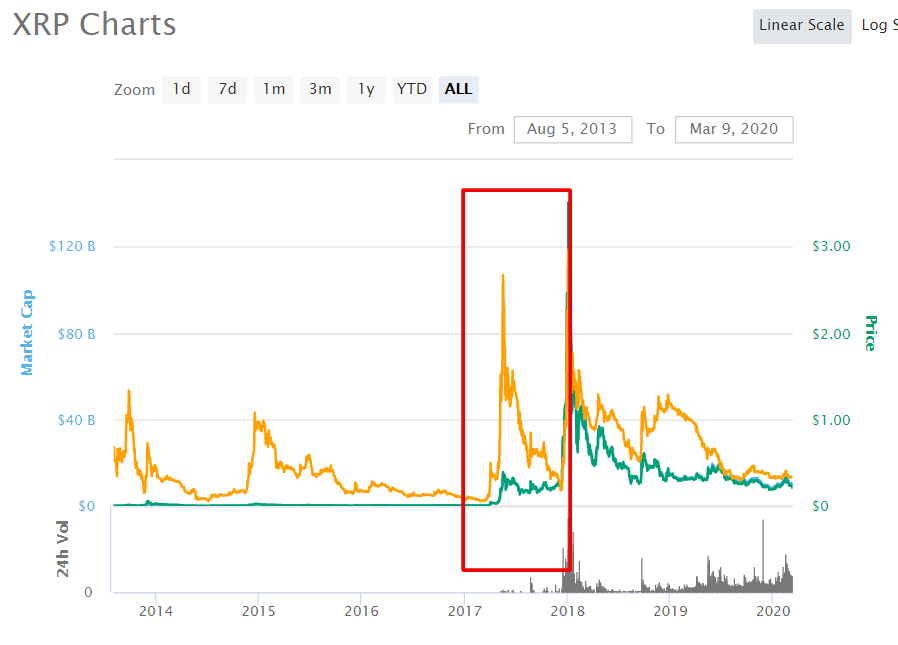 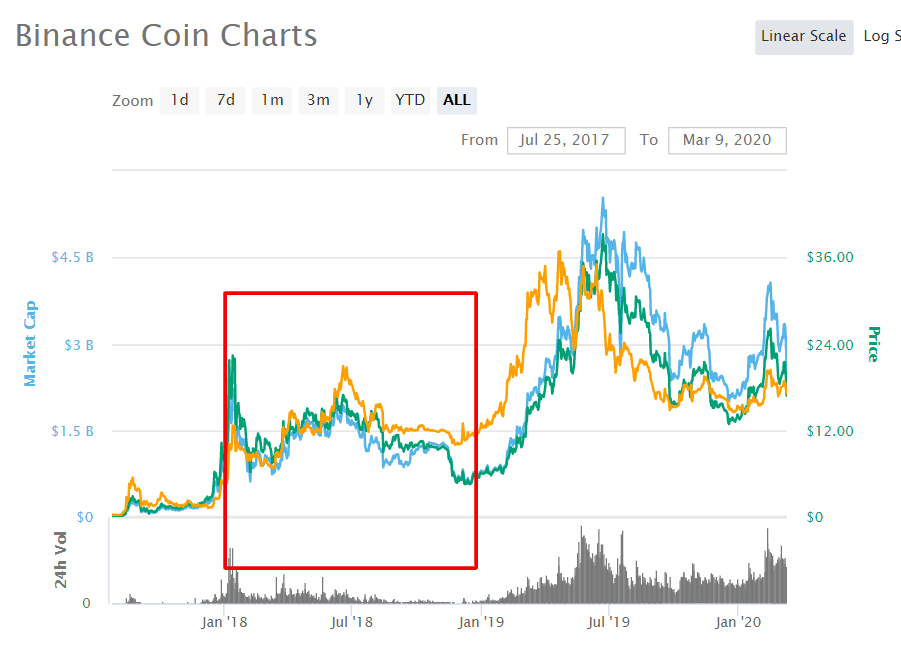 *Price charts are from CoinMarketCap.com

Some of these picks are pretty impressive, especially considering the massive bear market of 2018.

As mentioned, Teeka is employed by Palm Beach Research Group, which is an investment advisory firm that publishes various investment newsletter services. The services that Teeka edits include the following:

These are all follow-along style investment advisory services that, in a nutshell, tell subscriber what to invest in and when to invest. Subscribers are provided with specific recommendations, trade alerts, updates and more, similar to The Oxford Income Letter, Money Map Report, and hundreds of other similar services.

Teeka Tiwari has been called a scammer and fraud more than once. But why is this?

Well, let's take a look at what some people are saying.

There were some complaints with the BBB I was able to find, such as this one, where people have had trouble obtaining refunds for his services within the specified time frames... 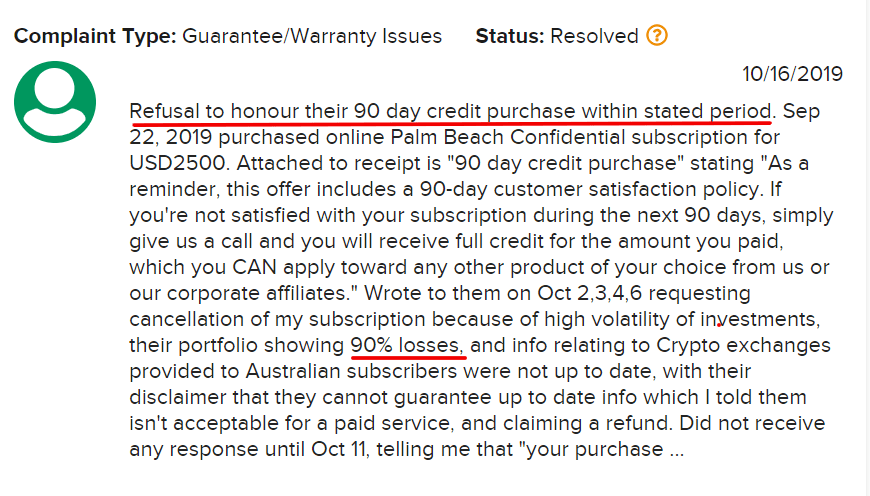 However, this is more of a problem with the publisher, Palm Beach Research Group, than with Teeka himself.

It's also worth noting that in the complaint shown above the person claims that there have been 90% losses with his recommendations, further corroborating the subscriber comment shown earlier.

Another review comes from yet another disgruntled subscriber who feels they were mislead into subscribing, and that Teeka's predictions didn't come close to materializing. This complainer specifically states that "I feel scammed"... 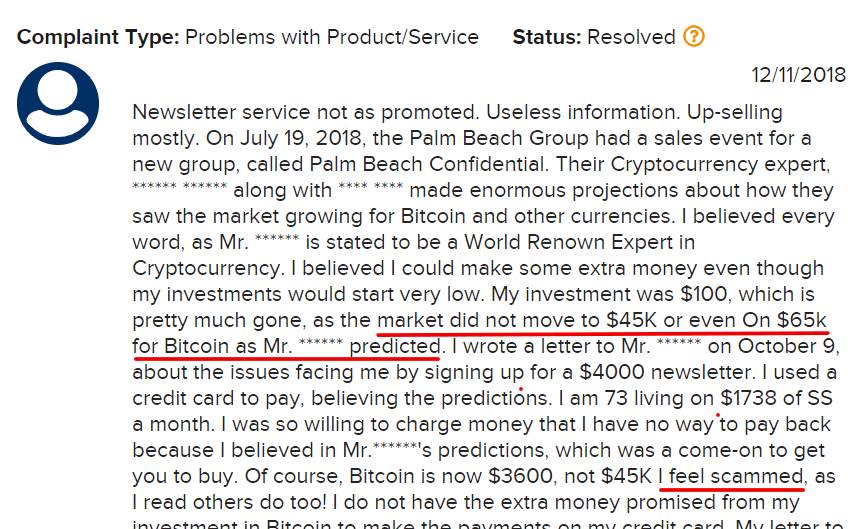 There were even a few reviews on Yelp of Palm Beach Confidential. Below you can see a complaint from a subscriber who describes Teeka Tiwari as "very professional", but claims he hires a "sales team of sharks"... referring to the pushy sales tactics employed... 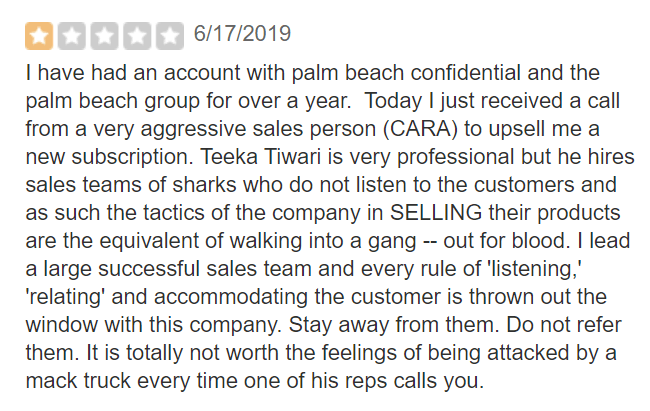 A few other scam complaints I stumbled upon come from DirtyScam.com.

But again, this would be more of a Palm Beach Confidential problem than a Teeka problem.

The person below refers to Palm Beach as "the biggest scam I have ever seen", and claims that they "have done nothing but lose" following Teeka's recommendations...

Then of course there are the accusations that Teeka is just pumping & dumping stocks/cryptos for his own benefit, which is worthy of it's own complaint section.

Now I've seen interviews where Teeka claims that he isn't allowed to invest in his recommendations. He claims that his employer, Palm Beach Research Group, will not allow him.

However, after doing a little investigating on my own I have not been able to find any such policy prohibiting him from doing so.

Compare this to other investment advisory firms similar to Palm Beach Research Group, such as The Oxford Club (which I've written a review of), has a policy in writing that specifically states their employees must wait a certain period of time after a recommendation is published before investing their own money.

I've read over Palm Beach Research Group's Terms of Use policy and have found nothing of this nature - which is concerning because you would think that if a policy like this did exist then they would be more than willing to make it publicly known, since it adds a stamp of legitimacy.

That said, I'm certainly not accusing Teeka of doing pump & dumps and have no evidence that he does.

He's got one heck of a good background with plenty of high-level experience in the world of investing. He's made some pretty amazing crypto predictions that have turned out wonderfully, and undoubtedly made readers a lot of money.

I guess whether or not you think he is legit is somewhat of an opinion.

The main problem that I see, and the main reason for many of the scam accusations against him, is the marketing material. He claims he just wants to help people and isn't an egomaniac and whatnot, but then his promotions are misleading and make it seem like anyone who buys into his newsletters are going to strike it rich... and he often brags about his track-record while conveniently leaving out any losing recommendations he's made... which as you have seen some people claim account for up to 90% of them.

He's always preaching about the next BOOM in crypto, how this coin or that coin is going to make you rich and whatnot... and when he hypes up predictions like this and some of them don't materialize... people lose faith.

If he could just tone down his sales pitches a little bit it would make a world of difference.

This is an even more difficult question to answer. It all depends on what you are looking for.

The services he provides are mostly focused on, as we've discussed, asymmetrical risk. He looks for opportunities with massive upsides and little downsides... which hopefully won't break anyone's bank accounts if they do turn out to be duds.

What he doesn't focus on is steady and reliable investment choices.

So, it just depends on what you want.

If you are looking for an investment advisory service that takes a more value-based investing approach for more reliable investments then I'd recommend Stock Advisor, which has a proven track-record and is one of the very few out there that I do actually recommend.

Now it's your turn: What do you think about Teeka Tiwari? Can you trust him? Let me know in the comment section below...