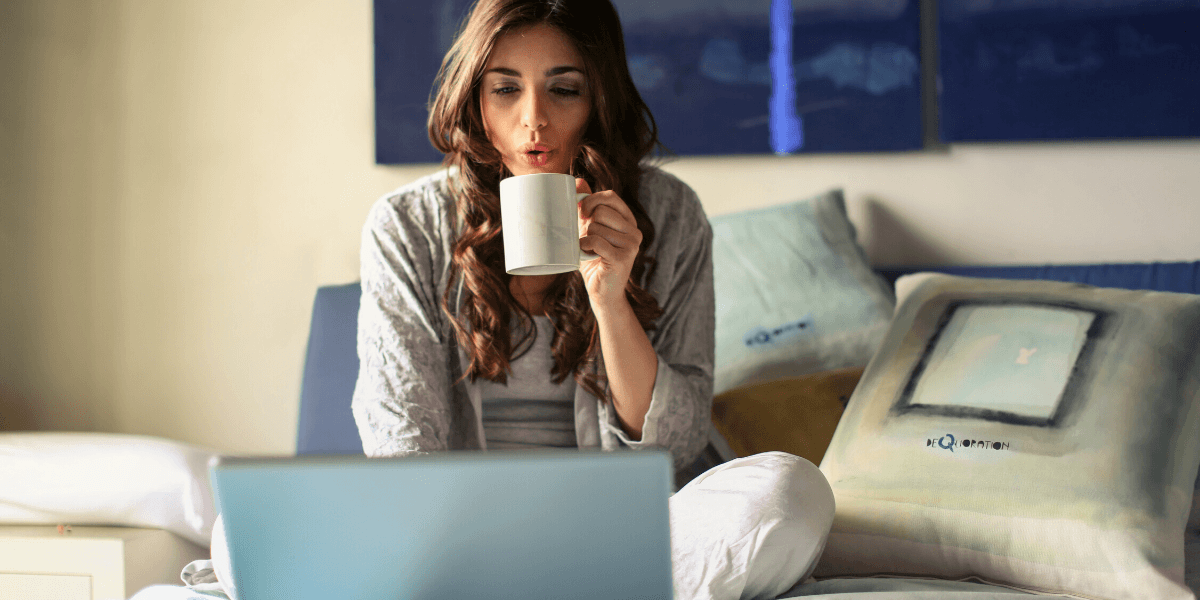 Is the Learning Advantage work at home program legit? Is it a scam? Can you really make easy money like they say?

Upon landing on this work from home opportunity I was skeptical. Things sounded a bit too easy and too good to be true, and of course there are plenty of warnings about work from home scams out there. So... I decided to do some research into it more. I was pretty sure it was a scam from the start, but of course you can't always judge a book by it's cover.

In this review I'll be going over how the program [allegedly] works, some lies they tell us and why it will NOT work as they say, and more.

Spoiler Alert: You definitely will NOT want to join this program.

Quick Navigation
What Is The "Learning Advantage" Work From Home Program?
Loads of Lies & Red-Flags
It's All a Scam
The Takeaway

What Is The "Learning Advantage" Work From Home Program? 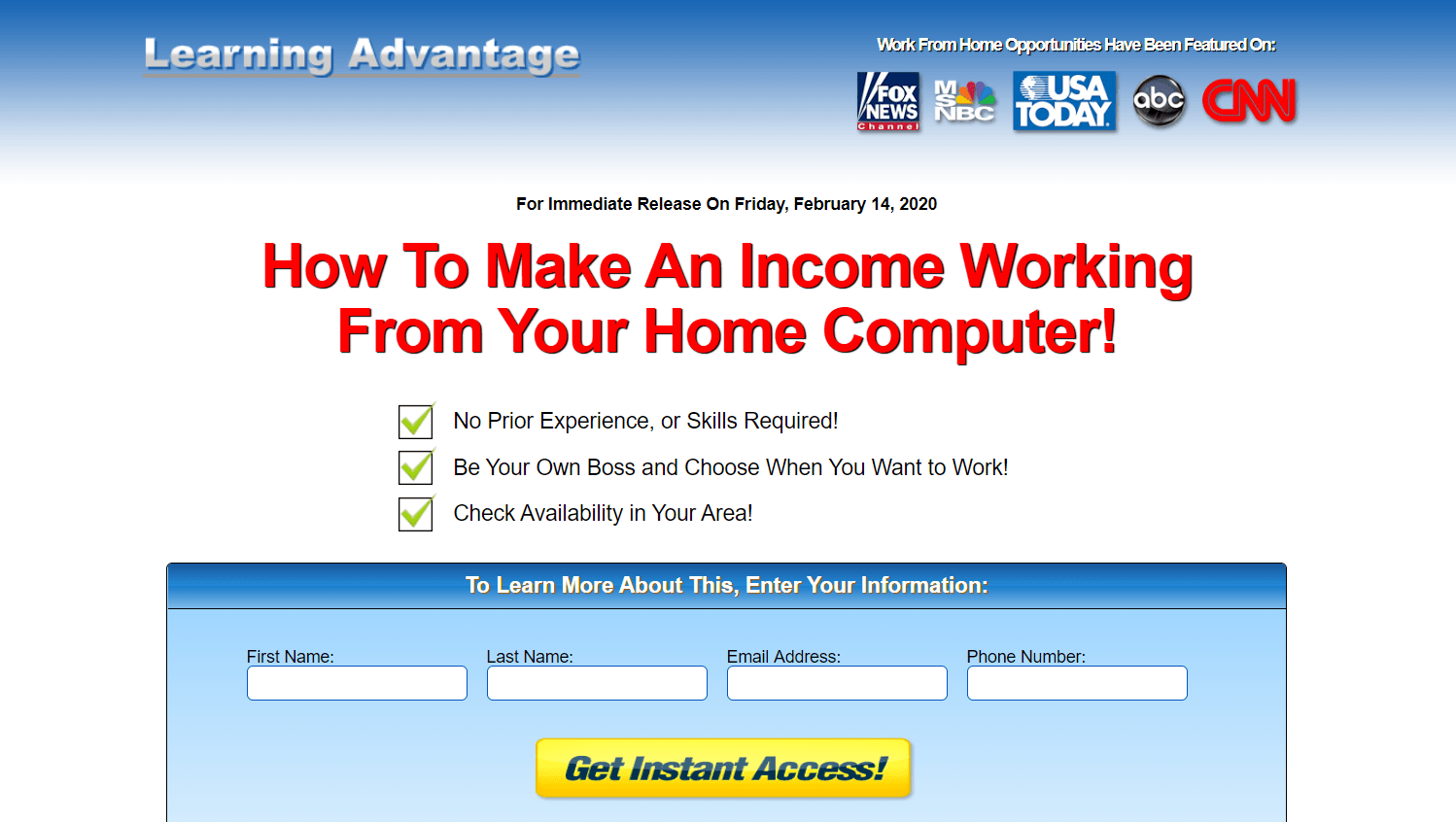 The job sounds pretty awesome... being able to work from home without a boss, no prior experience required, and you can work whenever you want.

Sounds pretty good to me.

Not only that, but they claim that "this work from home system has helped thousands of people just like you"... 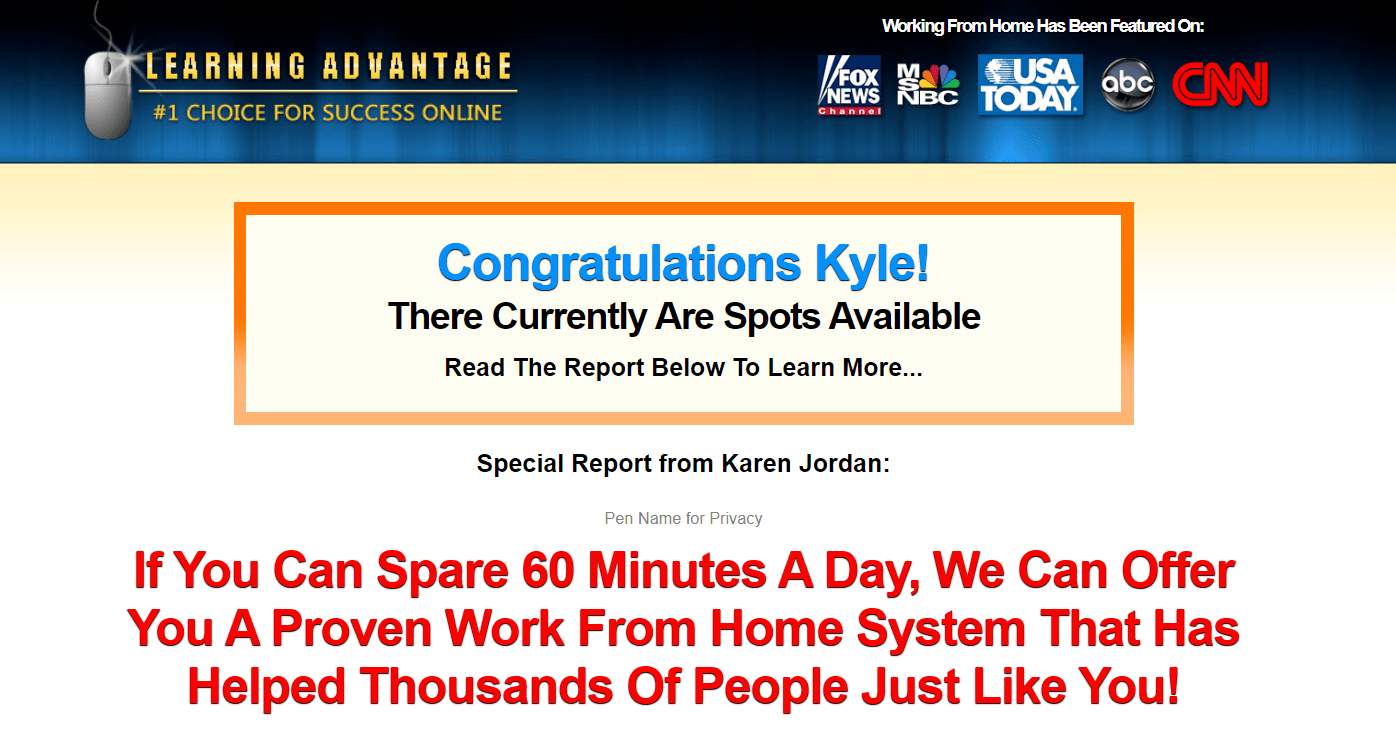 So it sounds legit. I mean, if it's already helped thousands of other people... then it must really work, right?

The idea is that companies are looking to cut their operation costs and so are looking for people to work from home posting links for them. And supposedly these jobs "are in huge demand"...

How they tell us it works couldn't be more simple. 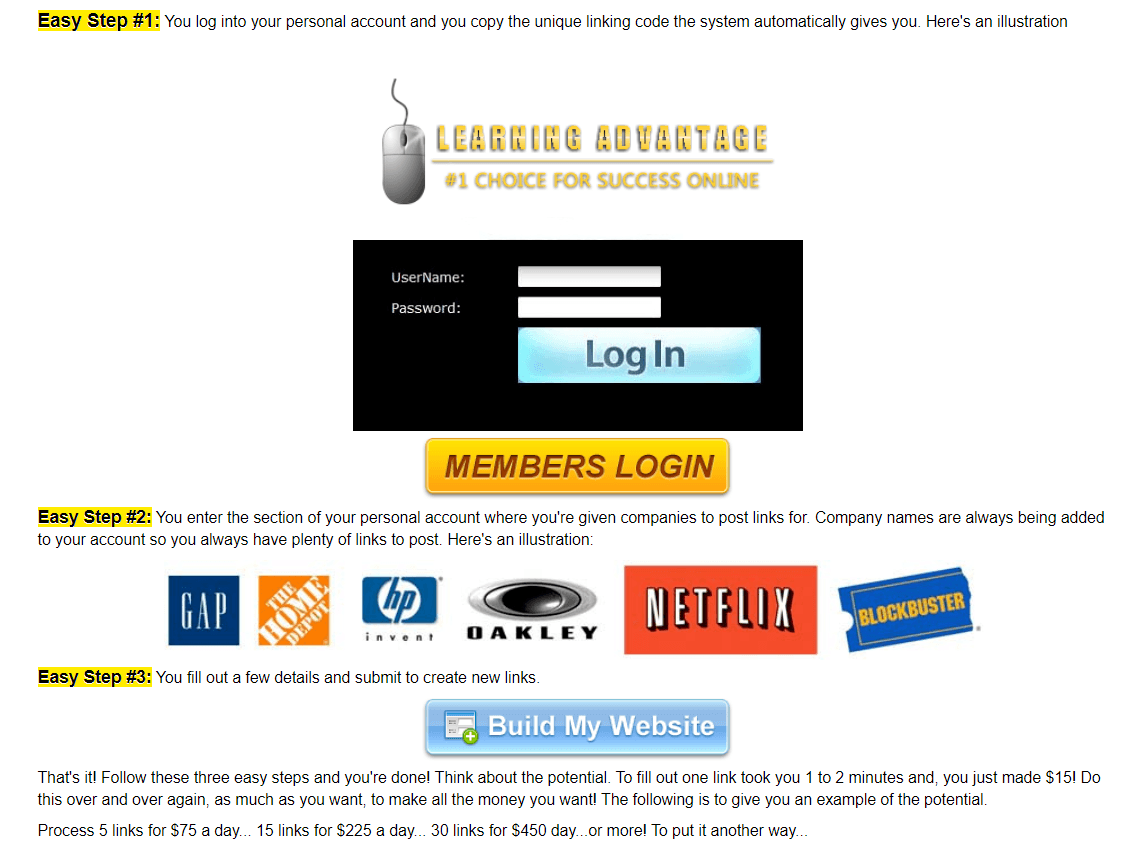 They make it sound like the easiest job that ever existed. And what's more is that they claim it takes only about 3-4 minutes to post a link and that each link will earn you about $15 on average.

Earning $15 on average for posting a link that only takes 3-4 minutes??? Sign me up! You could easily make a full-time income doing this... and it sounds so darn simple.

But wait a minute... Let's not forget the old saying... "if something sounds too good to be true then it probably is".

This saying applies perfectly right here. It sounds way too good to be true and is... not true... it's a scam with loads of lies...

After digging around a bit more I was able to uncover quite a bit of lies that they tell us as well as red-flags that point to this whole thing being a scam. Let's go over a few...

The name of the lady that is supposedly behind this program is "Karen Jordan" (and apparently they have promoted this scam under other names too!), but really this is just a pen name... meaning it is made-up.

As you can see below, they actually disclose this information, but there's a good chance most people don't even see the fine print...

Additionally, the picture of the woman is a fake. That is actually a stock photo that anyone can purchase and use as they wish online. They also disclose this information in fine print... 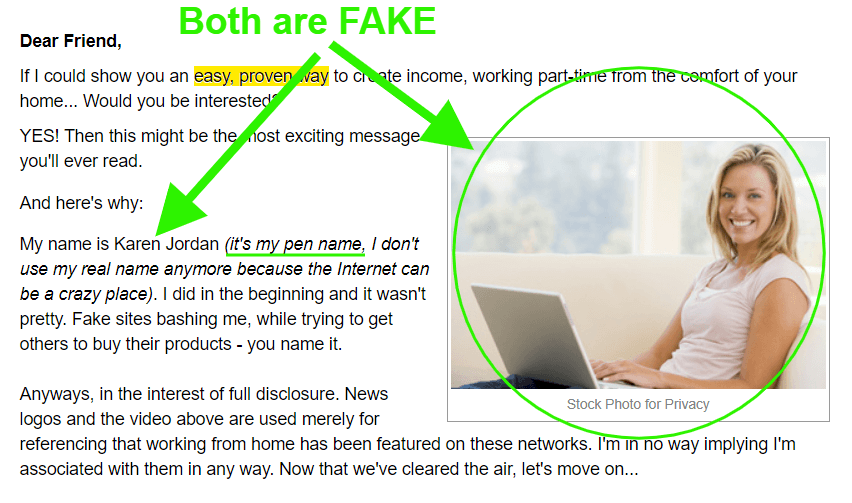 So... why on earth would the real person behind this program be covering up their identity?

Is it because they are scamming people and don't want to face the consequences? I think this is a perfectly logical explanation!

If this program really were helping thousands of people then the person behind it should be more than happy to show their face.

#3. Lots of Past Identical Scams

As if what I've just showed you isn't already bad enough, there have been numerous identical past scams.

Yep, you heard me right. This same scam has been around for quite a while. The people behind it just keep re-hashing it under different names so that they can promote it as some sort of brand-new opportunity, which it is not. This is actually something I warned about in my list of work from home scams.

So, why would they be changing the name of this program?

The logical reason is because it is a scam, and once too many people realize that, they need to change the name so that they can promote it as a new opportunity without it being labeled a scam... until people catch onto it again of course.

Below you can see an identical version of these scams. "Learning Advantage" side-by-side with "Computer Scene"... 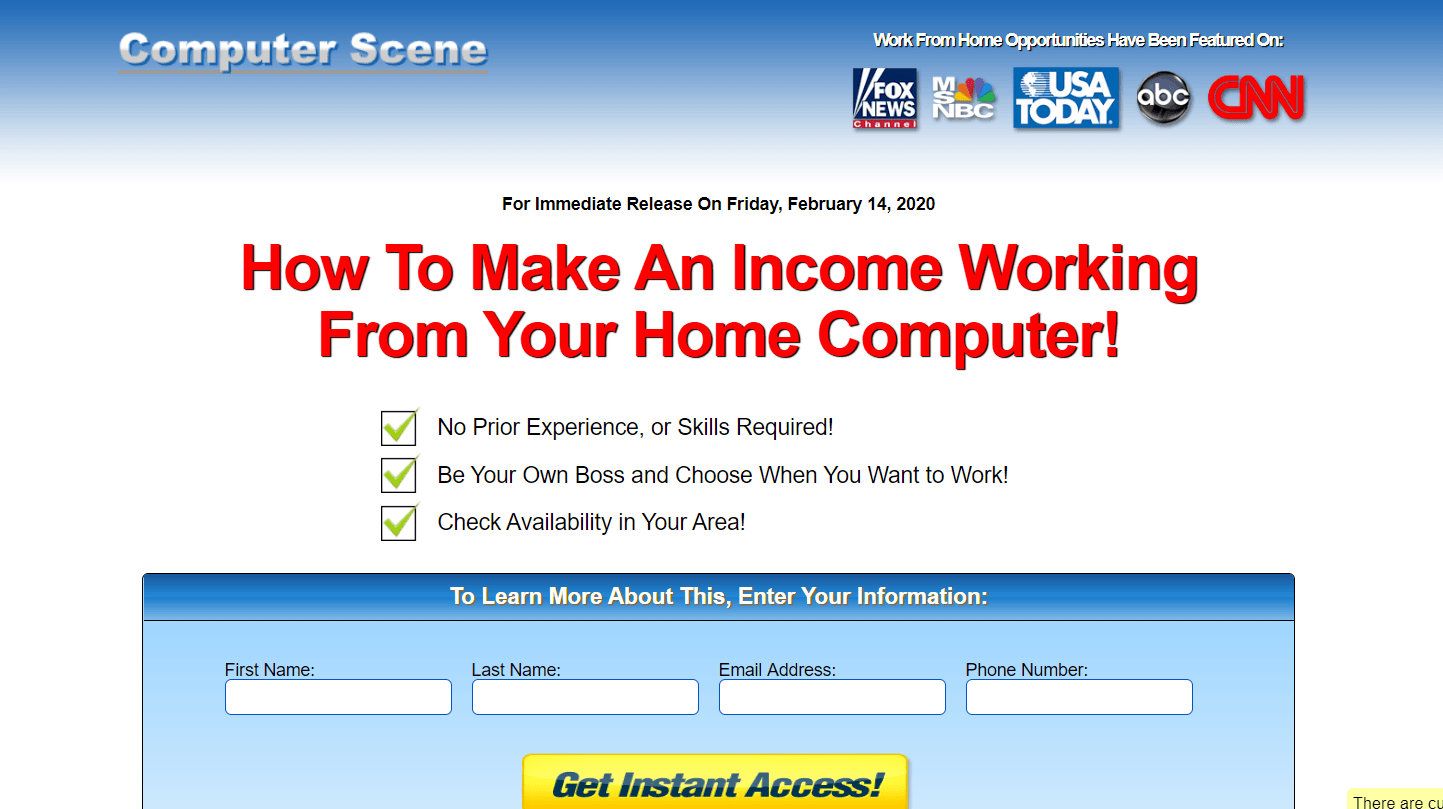 It's All a Scam

This "link posting" stuff they are promoting doesn't actually work. I've been involved in online marketing since 2015 and work full-time in it... this is a complete scam... this I know for certain.

However, it's a bit tricky because they are copying the idea of affiliate marketing to some extent.

Affiliate marketing is when you promote products for companies online and earn commissions when you help make a sale. When you do this, in a nutshell, you post links for the companies and you earn commissions when people click on these links and purchase whatever it is that you are promoting. This is actually how I make a living working online (more info here) and it is a legit way to do so.

HOWEVER, there is a lot more to it than just posting links. If it were that easy then I'd have my entire family doing this and we'd be making a killing.

Making $15 for every link you post is a ridiculous claim. There is absolutely no good way to estimate your earnings per link. It all depends on the amount of people that see the link, click on it, and ultimately purchase whatever it is you are promoting.

And it takes a lot longer than just 3-4 minutes per link. There is a lot more to this type of work than just posting links, although that is part of the job.

It's a scam. You've been warned!

If you actually buy into this program you will be provided with some crappy, out-dated training that will just have you wasting your time chasing a dream that will never materialize. What they provide in the training won't get you anywhere... which is why they have to use deceptive and scammy marketing tactics to get people to buy this crap in the first place.

If you want to learn how to do affiliate marketing the right way, a proven way that actually works, then the Wealthy Affiliate training program is what I recommend. This is how I learned and I'm still a member to this day.

Just don't expect it to be quite as easy as the scammers behind "Learning Advantage" make it sound!

PS: Also feel free to check out my massive list of 70+ ways to make money from home here.