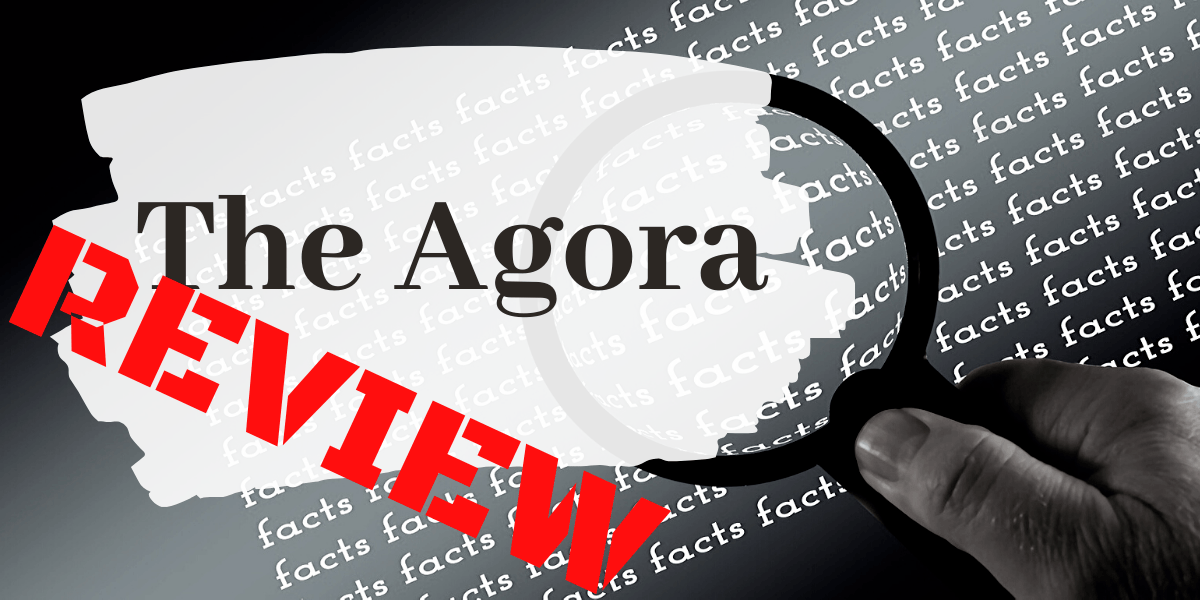 Is The Agora a Scam Company? – You Should Know This!

Wondering if you can really trust the information from The Agora? Should you subscribe to their newsletters? Are they worth it? Or, is The Agora a scam company that should be avoided like the plague?

Some people have been claiming they are a scam, so we decided to look into things more. After doing some digging around, what we've found isn't too pretty. In this review we'll be going over what exactly the company is, the founder, some run-ins they've had with the law, complaints, what former employees have to say about the place and more. Let's begin...

What Is The Agora?

The Agora is a network of more than 40 different media businesses around the world. It's basically an umbrella company that various other companies exist under, publishing information on everything from investment opportunities, to travel advice, alternative health advice and more - and has also been referred to as a consortium of many smaller companies, sometimes called "The Agora Group".

The Agora isn't to be confused with Agora Financial, which is just one of the companies under its umbrella. Other more well known companies in this consortium include financial information publishers like Stansberry Research, Banyan Hill, Money Map Press, Angel Publishing and The Oxford Club, as well as alternative health information publishers like NewMarket Health.

Everything started out with Bill Bonner in 1978, with the publishing of mostly failing newsletters, along with some that proved worthy and helped the company grow.

Although the information provided by their various companies varies greatly, it is all focused on providing leading-edge, often alternative and contrarian ideas, to as many readers as possible - whether this be about politics, investment opportunities, health, etc. And this information is provided via newsletter services, which is something that Bill Bonner pretty much paved the way for with this company.

If it's a publishing company that sends out follow-along style subscription newsletters and it's based in Baltimore, then there's a darn good chance it's part of the group. But the information on The Agora company is limited and can be confusing.

What started off as one company seems to have branched off into many, many of which are incredibly similar. And what's also confusing is that many of them are under the umbrella of "The Agora", but aren't said to be founded by Bill Bonner, which seems to mean that others at the company have branched off and founded other companies of their own... still in The Agora group (confusing). Additionally, The Agora has bought out other small publishing companies bringing them under their wing.

Who Is Bill Bonner? 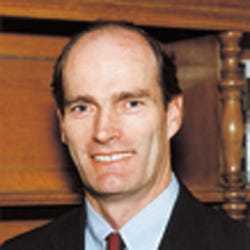 Bill Bonner is the founder, and a politically right-sided economist who often offers contrarian views of the markets, whether they be financial, political, or business.

He is also a best-selling author, with 3 books that have made the New-York Times' best-sellers list... and this isn't fake news. These books include "Financial Reckoning Day: Surviving The Soft Depression of The 21st Century", "Empire of Debt", "Mobs, Messiahs and Markets" - and his latest publishing has been "A Modest Theory of Civilization: Win-Win or Lose" (2019).

Trouble With The Law

The Agora companies have received quite a bit of heat over the years, and continue to face scam & fraud accusations.

In a 2019 case the FTC sued Agora Financial and some other Agora companies because they concluded that:

One of the incredibly misleading promotions that got the company in trouble was a teaser for what they called "Congressional Checks", in which they promoted as being "Congress’ Secret $1.17 Trillion Giveaway".

The promotion was incredibly misleading by any standards, and the FTC agreed. In a nutshell, it led people to believe that they could simply sign their name on some list to be able to collect checks on a regular basis, which is obviously far from being true. In reality, it was a deceptive promotion for an investment opportunity and was used as lure to bring in new subscribers to one of Agora Financial's newsletters.

*Note: In this case there were other health-related Agora companies that were sued for promoting a misleading natural diabetes cure as well.

Another case came from the SEC in 2003, in which the head of their Stansberry Research publishing company, Porter Stansberry, ultimately had to pay $200,400 in restitution (plus interest) to repay the victims of what the SEC labeled as "securities fraud".

Basically what happened was this: there was an opportunity advertised that apparently Stansberry wrote and it was published by another company called Pirate Investor LLC, which claimed that investors could pay $1,000 and double their money on a specific investment. This received a bunch of complaints and then the SEC investigated... concluding that what they were doing was fraud.

*Not entirely sure Stansberry's connection to this other Pirate Investors company.

With all this bad information in mind, it's important to point out that the parent company here, which is The Agora, may not have had anything to do with these problems that got their smaller companies and employees in trouble.

In fact, in the SEC case listed above the attorney defending the case stated that "The parent company had nothing to do with the publication at issue".

However, let's not make a bunch of excuses here. If they really didn't have anything to do with the issue then they better start monitoring their smaller companies and employees more.

Many of The Agora companies are notorious for unethical practices and there are loads of complaints stemming from this. Common complaints come from people who...

When you go to sites where people can leave independent reviews of products/services, such as Pissed Consumer, SiteJabber, Trustpilot, the BBB, etc... you will often find plenty of complaints about the various Agora companies.

With Agora Financial the BBB actually issued an Alert due to the hundreds of customer complaints they've been getting, which is pretty serious...

Pretty much all of their publication companies receive a lot of complaints from consumers, Agora Financial being one of them taking most of the hit.

Now some of their companies don't seem to be nearly as bad as others, but we'd still recommend looking for reviews on sites like SiteJabber, Pissed Consumer, BBB.org, Trustpilot, etc. before buying into any subscriptions. On all of these sites people can leave independent reviews, which aren't 100% trustworthy, but still give you good insight into what people think of them.

As you can imagine, going along with the bad reviews, many of these companies receive very low customer ratings. In particular it is those that provide financial newsletter services, which seem to make up the majority of Agora companies.

*Note: It's important to point out that many of the companies receive really good reviews too. But the large amount of complaints is certainly concerning.

What's possibly the most troubling is what some former employees at some of the companies have said about these places. It's one thing to have a lot of customer complaints... but when actual employees who are on the inside are saying things such as the whole thing being a scam... well... then you know there are definitely some serious issues.

There are some reviews on Glassdoor from former employees. One of the most recent is from an anonymous employee who states that "If I were you, I'd run in the other direction", calling the place a "glorified scam" and also stating that they provide "bogus" financial advise that just tricks people... 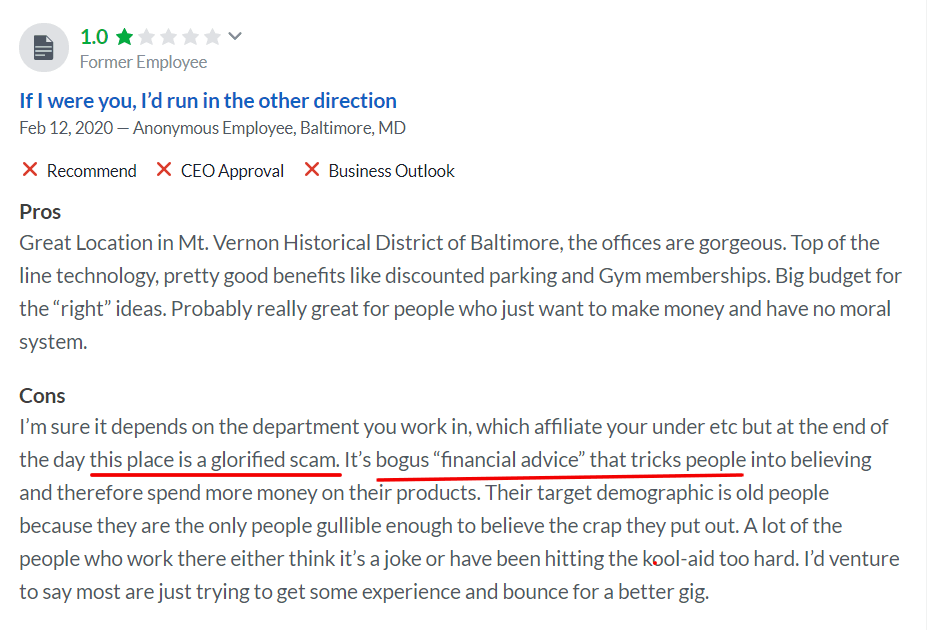 We don't know which Agora company this person worked for, but it was obviously one of those providing financial newsletters of some kind.

Another review from a different former employee goes on to say that it is a "Fine place to work if you lack moral compass", with an emphasis on "if you lack moral compass". The entire review was far too lengthy to show here, but basically what the person claims is that "these publishers prey on that desperation" to sell their newsletters and information, referring to people in situations where they are desperate for information, such as those in financial trouble or with serious health conditions. 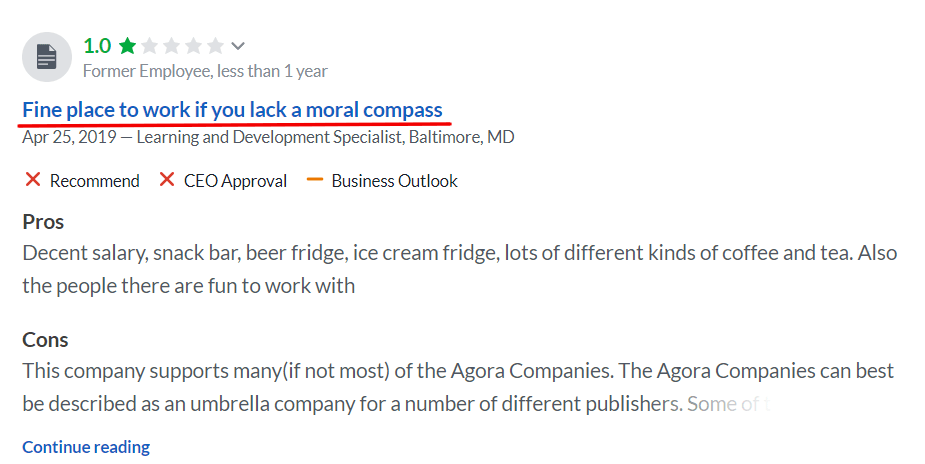 And just for good measure... here's another former employee review from someone who claims "they are scamming the crap out of people"...

Now we should make it clear that the overall rating at Glassdoor is actually fairly high, about a 4 out of 5 star rating, but again, negative reviews like this are too concerning to simply look past. especially when there are multiple saying the same thing.

Other common complaints from former employees include:

The Agora is a network of different publishing companies, most of which provide financial information, with others providing information on health & travel. The overall reputation of these companies seems to be pretty negative based on our research, which mainly seems to be due to some of the tricky/deceptive marketing tactics employed by the companies to lure in new subscribers to their various newsletter offerings.

Should you subscribe to any of the newsletters offered by Agora companies?

This is something you should look into more and determine for yourself. One newsletter's bad rating does reflect bad on the company as a whole, but it might have absolutely nothing to do with another newsletter from a different company in the Agora group.

Be smart, do your own due diligence and stay safe. If something sounds too good to be true then it probably is... a great saying to keep in mind at all times.

Now it's your turn: What's your take on The Agora? Let us know in the comment section below...

PS: If it's an investment advisory you are looking for, we'd recommend going with a more reputable company. Motley Fool's Stock Advisor is a good pick, having a proven track record.