Can you really make money selling Tupperware by joining the opportunity as a consultant? And when I say really — I’m talking about realistically. How realistic is it to join and expect a nice supplemental income?

Of course most consultants are going to tell you that it is a great opportunity, but they often have a hidden agenda, as I will talk about in more detail.

The simple truth is that, Yes — you can make money selling Tupperware — BUT, it is not the incredible opportunity it is often promoted as being.

In this article I’ll be showing you exactly how this business model works and why it is somewhat stacked against you.

Thinking about Joining as a consultant? Ya…. I think you should read this first…

Tupperware is what you call a direct sales company, and they use a multi-level marketing compensation plan which I will go over in detail next.

Anyone can join in on the opportunity as long as they buy the business kit, which costs $99 and includes products as well as business tools to get started.

Consultants are responsible for all the selling and marketing. Tupperware does not retail products in stores. Many consultants host parties to both sell products and promote the opportunity. These parties usually consist of consultants bringing together food in their awesome Tupperware containers and showing them off to others as they eat and chat.

As a consultant you would collect the money for products people are buying and then place the orders for them.

Parties can also be hosted virtually online, such as on Facebook, where you direct people to purchase through your own replicated Tupperware website that you will earn commissions from.

How The Compensation Plan Works

In order to get access to the compensation plan you first have to buy the Business Kit for $99 that I mentioned above, and then you have to sell at least $250 every 4 month period in order to stay active.

There are 3 basic ways in which you will be able to make money from the compensation plan. These include:

Retail commissions are the commissions that you earn from the sales you personally make, which are 25% of every sale.

Likewise, you will be able to buy products at a 25% discount for yourself.

Think of it like this: You are able to purchase Tupperware products at a wholesale price and sell them at a mark-up price of 25%.

In order to encourage consultants to make more personal sales, Tupperware also gives out bonuses if you reach a certain volume of sales within a given month.

So this has the potential to be a nice little extra income if you are good at selling.

This is where the MLM part of it comes into play. MLM stands for “multilevel marketing” and this is basically a commission structure where you can earn commissions by recruiting in other consultants, which encourages recruitment and teambuilding.

MLMs have a pyramid-like structure, but they aren’t pyramid schemes. Yes, with Tupperware you can go out and recruit people in beneath you, earning money from their efforts, but the difference is that Tupperware sells legitimate products and pyramid schemes (in their pure forms) don’t sell products. 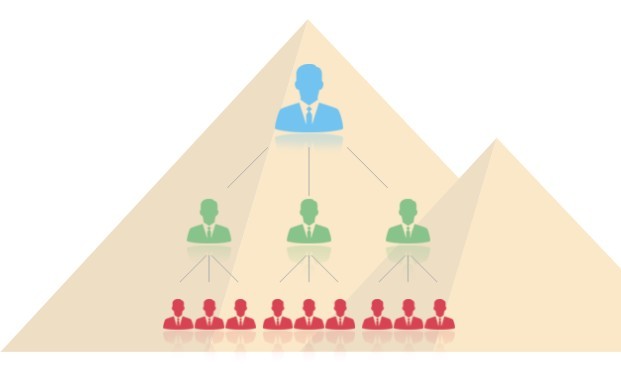 Finding a good explanation of the team bonus portion of the compensation plan was very difficult to come by, but I did manage. It seems that they like to keep this more secrative than the rest of the comp plan.

The amount of commissions you can earn by recruiting in other consultants varies greatly depending on your rank. The different ranks include…

… and moving up these ranks is mostly about building a team, which means recruiting in more consultants.

It doesn’t matter what rank you are, you will earn the same 25% retail commission no matter how high. However, once you reach the rank of Star Director you will be able to start earning ‘generational bonuses’ and you can earn down to 7 generations deep at most.

One thing that I do like about Tupperware is that they are not nearly as focused on recruitment as many of the other MLM opportunities I have seen out there, such as ForeverGreen, Herbalife, Mary Kay, etc. They place a good deal of emphasis on selling products yourself, and this is good.

Sometimes MLM opportunities come a little bit too much towards the recruitment side of things, and this is where the lines between a legitimate MLM and pyramid scheme can get blurry. But Tupperware does not do this.

That said, if you do want to make good money as a consultant you are going to have to recruit. That is pretty much the bottom line.

Just think about it… If you make $25 for every $100 worth the products that you sell, how much are you really going to be able to make? You’re going to have to sell $100 of products every hour just to make an hourly wage of $25, and this doesn’t seem very realistic. Tupperware type products aren’t exactly flying off the shelves at stores — you aren’t going to be selling some new types of products that everyone is frantically wanting to buy.

Recruitment is key and I will go over some statistics next that will show you undeniable proof of this.

If you think you are going to be able to make good money selling Tupperware products alone, sorry, but you are probably in for a rude awakening.

How Much Are Consultants Actually Making?

Enough about how you make money and why you are probably going to have to recruit, let’s talk about how much consultants are actually making.

Let’s look at some numbers… Numbers provided by the Tupperware company themselves.

Below you can see a picture of their income disclosure from 2016. I know this income disclosure is a bit dated, but it shows what is really going on here and besides, the numbers don’t change much for this company from year-to-year anyhow. They are usually a bit behind on releasing their income stats, which is why this is the latest report I could get my hands on. 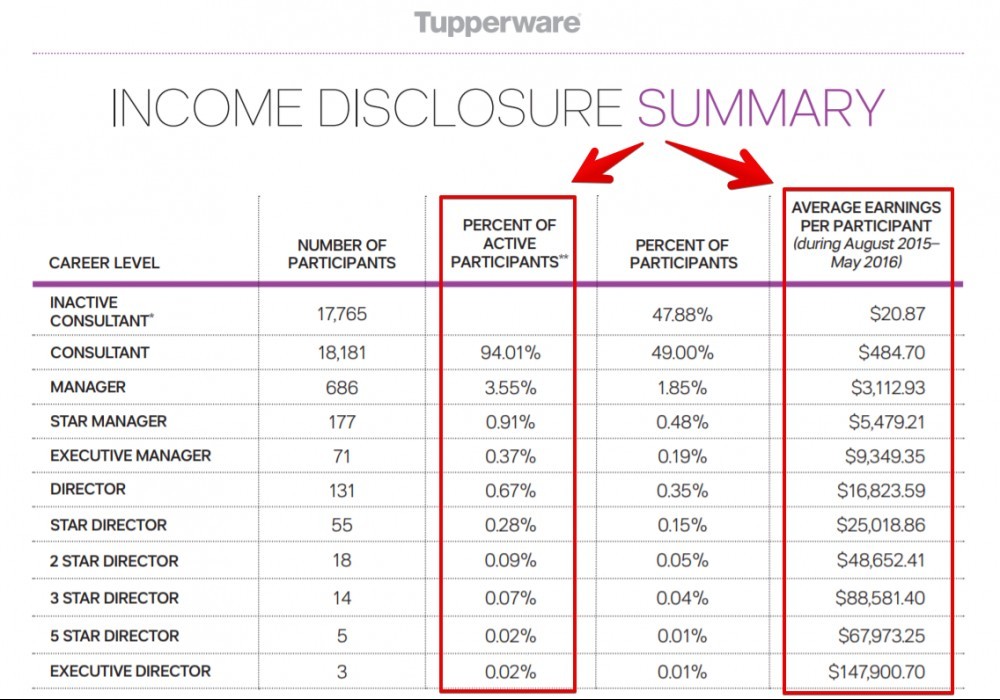 The first thing I want you to look at in this chart is the number of “inactive consultants”, which is 17,765. This is very close to the total number of active consultants. What this means is that a lot of people join the opportunity and didn’t even make the requirement of $250 in sales every 4 months in order to be considered active.

Why is this? Well, because this opportunity is not easy.

In order to even make an average of over $2500 a month it looks like you would’ve had to have reached the level of Star Director or above, which account for less than 0.5% of all active participants!

How crazy is that? I bet you weren’t expecting this when that overly enthusiastic consultant approached you about joining the opportunity.

The Reason for Such Low Earnings Overall

The reason that so few people are making good money with this opportunity is likely due to the MLM commission structure they have in place.

I see this kind of thing all the time. In fact, I don’t think I have ever looked into a MLM opportunity and not seen a very uneven income distribution such as this.

There are a lot of MLM critics out there that believe this type of structure should be banned. It presents an opportunity that has great potential, because there are many ranks and lots of room to move up, but the problem is that the large majority of people will not make much money. This is the way that it has to be due to the very structure, and the way it will always be.

Can you make money as a Tupperware consultant? Yes.

Will you make money as a Tupperware consultant? This is an entirely different question and the answer is… More than likely not very much at all.

The reason opportunities like this are often presented as being better than they really are is because the people presenting them are consultants trying to recruit more people into their team, so that they can move up the ranks and make more money.

But now you know the reality of it.

Overall I’m not a fan at all of MLM opportunities due to the fact that the majority of people always struggle. Some rise to the top and go on to make large amounts of money, which still makes the opportunity enticing, but the reality is that these are very few people.

Something else to consider when looking into MLM’s is the saturation of the market. Because recruitment is such a key component to making a good income, the easier to recruit the better. A fancy new MLM opportunity selling some trendy products might be easier to recruit people into than a business like Tupperware, that has been around for ages and is not very exciting.

But anyways… I hope you enjoyed this article and found it helpful. Now you know what to expect if you do end up joining this opportunity, which is completely up to you.

Before you go, since you are looking to make money from home you I would suggest taking a look at my top income ideas for earning from home.