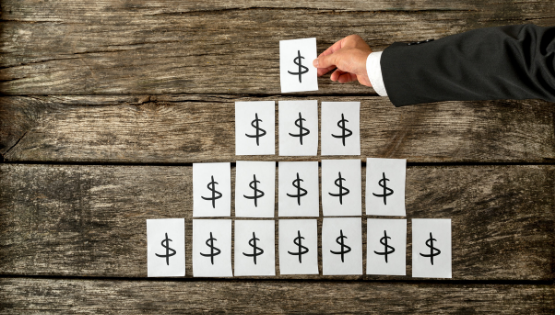 Is Ambit a Pyramid Scheme? – What They Won’t Tell You

The question of whether or not Ambit is a pyramid scheme comes up a lot, which is the reason for my writing this here.

Is Ambit a pyramid scheme? Is it a legitimate opportunity to make money? Should you join?

These are all important questions that need to be answered before you get involved in an opportunity like this.It’s no wonder why you may be questioning the legitimacy of Ambit. After all, they do rely a lot on recruitment of other members, and just in 2018 they were agreed to settle a $26.5 million lawsuit for ripping off customers in New York, charging more than they should have.

You could say there is some “shady” activity – or at least there seems to be.

In this article I’ll be going over the basics of the company, the difference between a legit MLM and a pyramid scheme, the Ambit compensation plan, why some call it a pyramid scheme and others don’t and more – oh ya, and the cold hard reality of actually making money if you were to join (if you make any at all!).

Ambit Energy is an energy company based out of Dallas, Texas that was started in 2006 by Jere Thompson Jr. and Chris Chambless. What they do is provide both electricity and natural gas services to deregulated markets that they are able to get their hands in.

Many operating in the United States, they have over 250,000 independent consultants working for them through direct sales.

Anyone can join in on the business opportunity and that is probably what brought you to this article here today. They have what is called a MLM, or multi-level marketing, structure – which means that recruiting in other consultants and earning money from what they do is a big part of the business – and also the reason people are calling it a pyramid scheme.

The Difference Between a Pyramid Scheme and a Legitimate MLM Opportunity

Some people who are very anti-MLM will tell you that there is no difference. However, the way the FTC sees it there is a fundamental difference between the two.

Yes they do. Their products are their energy service.

There is no one that is going to argue with the fact that Ambit sells legitimate products.

But it is a bit more complicated than that.

The Line Between Being Legitimate and Being a Pyramid Scheme

So which one is Ambit?

In order to join the business opportunity and become a Marketing Consultant, you first need to pay a $75 one time fee and $25 monthly fee for the website they will be setting you up with and training materials – which is in addition to being a customer of Ambit.

As a consultant you will be able to earn money in 3 main ways, which include:

The immediate income basically consists of “jump start bonuses” that you can get paid when you bring in new customers.

In order to get these bonuses you need to reach a certain number of “customer points”. For each customer you get to sign up you will receive 1 point. The reason you can get your first bonus (which requires 5 points) by only getting 1 customer is because you also get points for signing yourself up and setting up your website.

These are bonuses you get when people you have recruited in and people beneath them (your downline) get customers.

For example: If you get Joe to sign up as a consultant and he goes out and gets Susan + Joe to switch over to Ambit, Joe will get his $100 bonus for getting the customers and you will also get a $100 bonus since he is in your downline.

This is where the MLM side of the business starts coming into play.

As you move up the ranks, which include…

… you will be able to earn extra bonuses. For example, you will earn an extra $55 bonus for each consultant that gets their first few customers when you move up to the Regional Consultant rank.

The residual income part of the compensation plan is where the whole pyramid scheme thing REALLY starts coming into play.

Pyramid Scheme or Not?

There is obviously a lot of emphasis placed on recruitment here. For both the Leadership Income and Residual Income it is all about recruiting in new consultants and earning money from them. The only way to earn money from actually getting new customers yourself is through the Immediate Income which consists of the Jump Start Bonus.

HOWEVER, one thing that I did notice and that I do like about Ambit is that they require consultants to make increasing numbers of personal customer sales in order to move up the ranks. It is not entirely about recruitment.

Obviously in order to maximize earnings you are going to want to move up the ranks. And in order to do this you are required to recruit in more consultants. But you are also required to get more personal customer sales. The requirements to meet each rank are as follows…

This means that Ambit is at least trying to get to stay on the legitimate side of things and not lean too much towards recruitment, which could bring them a little too close to being a pyramid scheme.

I’ve seen many MLMs that are designed moreso like pyramid schemes than this and that still operate legally. So I wouldn’t personally call Ambit a pyramid scheme.

A study by the Consumer Awareness Institute analyzed 350 different MLMs (Ambit Included) and found that about 99% of people who joined these opportunities lost money.

I’m not sure how accurate this number actually is, because I can imagine it would be a difficult statistic to calculate, but this is a reputable study.

And while the study probably doesn’t account for all the people who joined opportunities and just gave up (I mean, how could it?), there is no doubt that the overwhelming majority of people fail.

The reason for this has to do with the pyramid-like structure. Commissions are passed up the pyramid. This means that those at the top make more money and those at the bottom make less money. As we all know, there are always more people at the bottom and there always will be. This means that most people involved in MLMs will actually find it more difficult to make money because they are having commissions sucked away from them.

The 2018 income disclosure released by Ambit shows exactly this. 90.89% of all consultants earned an average of $110.62 for the entire year. And if that isn’t bad enough, the median earnings is $0, which means that most people didn’t make a penny.

In the chart below it states that less than 1% made it to the Executive or National rank and earned anywhere even close to a full-time income. I did the math and the people who make up the Executive Consultant and National Consultant ranks are only 0.54% of all participants!

It is still arguable whether or not this is a pyramid scheme. Although I stated that I don’t think it is one, there are many people out there who would argue to the death on this subject.

The FTC doesn’t seem to think so either, yet they do warn people about joining these opportunies because they know the incredibly low number of people that actually have success.

What’s somewhat funny is that you could even argue that people might be better off joining pyramid schemes. I mean, at least pyramid schemes aren’t going to waste your time forcing you to run around trying to sell products (not ‘pure’ pyramid schemes anyhow).

But anyways, I hope this article help clear the air on all of this. While it may not be a pyramid scheme it certainly isn’t the great opportunity that it is often promoted as being.

Please leave any comments or quesions below 🙂

*And since you are likely looking to make money from home, check out my top picks for doing so Here.