Can You Make Money Selling Mary Kay? – The Harsh Reality

Since you are wondering if you can really make money selling Mary Kay, chances are you have been approached by a consultant and asked to join in on the business opportunity.

But, luckily you kept your cool and took a level-headed approach, deciding to look into it a bit more before joining–good for you.

The simple answer to this question is that ‘yes’ you can make money selling Mary Kay.

The more complicated answer is that ‘yes you can make money but it is nowhere nearly as easy and amazing of an opportunity as it is often promoted as being’.

The opportunity is often portrayed as being some incredible way to achieve financial freedom working for yourself from the comfort of your home–which is awesome–but not all that realistic.

In this article I’ll be going over “the harsh reality” (and yes it is harsh) of this business and what you absolutely NEED TO KNOW beforehand–which you more than likely were not told.

It started out in a small Texas store with only 5 products but has since expanded into a worldwide brand with over 200 products being sold in over 35 countries.

Much of the expansion can be attributed to the business model, which is that of direct sales coupled with MLM (multi-level marketing). Basically how it works is there is an independent sales force of consultants that do all the selling, and also have incentive to recruit other consultants into the business because of the MLM part of it. There are no products sold in retail stores–it’s all done by the independent sales force.

Anyone can join the business opportunity and become part of the independent sales force. However, you must purchase a starter kit for $100. Then you must also stay “active” in order to receive commissions, which requires that you purchase at least $200 worth of wholesale products every 3 months.

A Quick Look at The Products You Will Be Selling

With over 200 products there is a lot going on here. You probably already know what is being sold, but just to give an overview here are the categories that all the products fall under…

Unlike many MLM’s out there, these products aren’t outrageously priced. They are not cheap either, but not very high in price like you often see with MLM opportunities.

I can’t speak personally for the product quality but based on reviews I’ve read and what I see, they seem to be priced fairly.

One of the popular ways to sell Mary Kay products and to recruit people into the business is through parties or classes–in which people can host and then you can help set up as a consultant.

Think you got what it takes? Well, then let’s take a look at how you get paid…

It was pretty ridiculous trying to find information on the comp plan. They seem to keep this a tightly guarded secret for some reason–from the outside world anyhow.

I was able to find a somewhat outdated detailed explanation of the compensation plan but it is confusing as all heck. Unless you want every itty bitty detail it would probably just be best to read the breakdown here…

As always, there are 2 main ways to earn commissions–through direct sales and recruitment.

These are the commissions that you make from direct sales that you personally make.

These could come from you purchasing extra Mary Kay products at wholesale and selling them at a markup, from getting a customer to sign up for recurring monthly purchases, taking orders at a party, etc.

You will be able to make up to 50% commissions here.

All the other ways to earn fall under recruitment. But before I get into this, let’s first go over the different ranks because these are important…

In order to climb the ranks, like always, it is all about building up your team. Take the rank of Independent National Sales Director for example: In order to make it to this level you would need to have 24 “unit” members and 20 “offspring” Independent Sales Directors–these are people you need in your downline.

Not only do you need to have more consultants recruited into your downline beneath you at each increasing rank, but you are going to need more higher ranked consultants to meet the requirements as you move up.

How It Works In a Nutshell

When starting out as an Independent Beauty Consultant you will only be able to earn commissions from your direct sales and you will be able to earn some rewards by recruiting in new consultants–but that’s it.

When you make it to the rank of Senior Beauty Consultant, which is achieved by making sales and recruiting in consultants, you will be able to earn 4% commissions on the wholesale orders that you “team members” make, aka the people recruited into your downline.

If we then jump ahead to that rank of Independent Sales Director–which by this time your team is decent sized because of the requirements to recruit in order to make it to this rank–you are then able to earn up to 13% commissions from the wholesale orders of your team and you can earn up to 13% “unit commissions” on top of that–additionally there are a variety of different bonuses you will be able to earn at this rank, including a team building bonus of $100 or more, a unit building bonus of $500 or more, a unit development bonus of $300 or $500 and others.

I’m not going over all the details, but you get the point–in order to move up you have to recruit more people in and build your team, which will then unlock more areas of the compensation plan.

Why It Is MUCH MORE DIFFICULT Than It Seems

MLM opportunities can look pretty amazing–they offer plenty of opportunity to move up within the company and plenty of earning potential. There are lots of ranks to climb and lots of commissions to be made.

What could be bad about this?

Well the problem all comes down to their basic structure, which is that of a pyramid–which is why they are often accused as being pyramid schemes (the difference here). 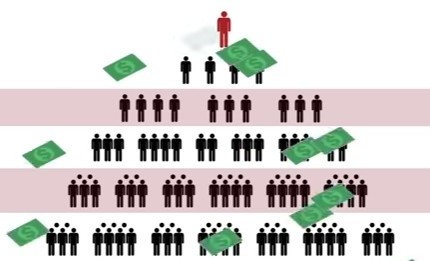 It would be great if everyone could climb their way to the top, but the reality is that they can’t. Because you are required to recruit people in beneath you to climb the ranks, there will always be a considerably higher amount of people on the lower ranks, and these people usually struggle.

If the market was unlimited then this could be a great business model, but it is not.

A Look at The Harsh Reality (Viewer Discretion Advised)

So now that we’ve just went over why this type of opportunity isn’t as good as it may appear to be, let’s take a look at some statistics to see the reality of it.

If you have just eaten I would give it an hour or so to digest. This information is not for those with weak stomachs.

The information they disclose doesn’t give you the complete full picture but we can get a good idea of what it’s looking like.

This earnings’ disclosure is from 2018…

As you can see there were 29,500 members of the independent sales force, aka consultants (in Canada). Of that number only 3,701 had been a consultant for at least 1 year.

*This tells us that a heck of a lot of people quit before a year. High turnover rates are common with MLM’s.

*Holy heck this is bad. That means only 1,743 consultants earn more than $100 for the entire year! Could this get any worse?

There were only 16 people who made it to the rank of Independent National Sales Directors and of these 16 people 56.3% earned commissions of over $100k.

Do you see how uneven this income distribution is? We started off with 29,500 consultants and now only 9 of them made it to the Independent National Directors rank and made more than $100k.

Most people fail to make much of anything. This is what a MLM pyramid structure pretty much guarantees.

Conclusion – An Opportunity Worth Joining or Not?

As if those statistics aren’t bad enough, you also have to consider business expenses, which I didn’t even talk about. There is a really good article on PinkTruth that explains why some people who make it to the rank of National Sales Director aren’t even making executive income.

The statistics show the opportunity to be pretty bad, which the overwhelming majority of people failing, but the reality might even be worse.

So to answer the original question: Yes, you can make money–but it is nowhere near as easy as it may seem at first.

This is the way just about every MLM is, which is why I avoid them. That said, some people who are amazing at recruiting people in left and right really like these opportunities. It all depends on what you are good at–just know that if you do want to make it to the top and have a chance to make big money, you are going to need to be recruiting constantly and you better be darn good at it.

If you want a way to make money from home but don’t like recruitment then something like affiliate marketing (my favorite–how I make a living) might be worth taking a look at.

Also, be sure to check out my top income ideas to earn from home.